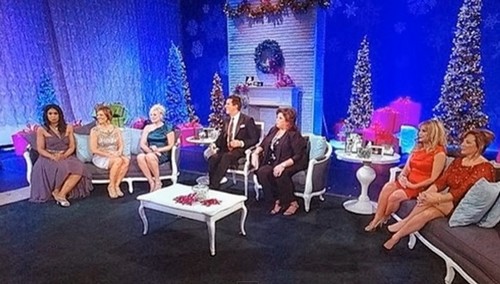 DANCE MOMS returns tonight on Lifetime with a very special episode after a fantastic season.  Tonight’s episode is called “Twas the Fight Before Christmas” and on tonight’s show Abby and the moms trade insults and even the dads make surprise appearances. If you missed the drama of the season finale, we have your recap right here.

On the season finale of Dance Moms and after one of the most tumultuous competition seasons ever, the Abby Lee Dance Company hit New Orleans hoping to retain their championship title at Nationals. While Abby focused on which dancers would compete, the tension between the moms spilled over into the street…literally. Tempers flared before the dancers even hit the stage.

On tonight’s special episode Tis the season of giving, but beware of dance teachers bearing gifts because Abby Lee Miller is about to give the moms some big ones. In this very first Dance Moms Christmas special, Abby is full of holiday surprises! The girls might dance to Christmas songs, but when the winter gloves come off, Abby and the moms trade insults and even the dads make surprise appearances.

Tonight’s episode is going to be another drama packed one, which you won’t want to miss. So be sure to tune in for live coverage of Lifetime’s Dance Moms Special “Twas the Fight Before Christmas” — tonight at 9PM EST.

Lead by executive producer Jeff Collins, Dance Moms have a collaborated a Christmas specials. There will be performances as well as hearing from the actual Dance Moms. But before all of that Jeff asks Abby what Christmas means for her. First and foremost it means two weeks off from dance. It gives her a time to de-stress. She really needs this break because frankly a lot of people are on her naughty list. That includes the adults.

It didn’t stop her from giving them all gifts. Although when they join her onstage with Jeff it doesn’t stop from voicing her mind on them along with her gifts. Using Santa’s “little” helper otherwise known as a shirtless man she distributes all her personalized gifts. For Kelly she gave her a beer chugging hat with extra tequila in the box. Jill receives cosmetics that would hopefully plump her lips big enough that she would be unable to speak. For Holly, she has orthopedic shoes because Holly has some ugly feet but a cute husband. Christi got a cash box so she would stop carrying money in a brown paper bag. And Melissa got sexy lingerie and a gift certificate for the million dollar matchmaker. You know when her current relationship falls through.

Afterwards, no one has time to be actually offended. They have to watch one of their daughters dance recital for the night. The first one is called “Christmas Morning”.

The second performance by Abby’s star pupil, Maddie, has a solo called “A Dancer is born”.

Back to the couch Jeff asks how well the dance moms and Abby get along. They say their like a family. A bit dysfunctional but there is love there. If Josh wants to see when people do hate each other then he should see Abby and Cathy go at it. Cathy is backstage and she’s been watching this far. In order to see who is worse he calls out for Cathy to join them onstage. Up to this point, Cathy has been maligned. She feels now is the time to clear her name.

How does she go about this? She basically throws Abby under the bus. She tells the mother that she felt bad when they got their gifts. She would have given her own Dance moms something with whole lot more respect behind it. Except for Jill. In no way is willing to put up that mom in order to get Jill’s daughter on her team. But she does make a point with the mothers. She brought up how Abby has been auditioning new girls in order to replace a team that keeps winning for her.

Abby feels like Cathy is taking what she’s doing out of context. She’s auditioning in order to push the girls she already has to be better. That was her way to inspire them. Christi and Kelly however disagree with this method. Abby has known their girls since they were babies. Why must she threaten them to do better?

Candy Apples’ senior dance group gets to perform “Holla” from the holidays. Jeff enjoyed it even while Abby remained stoned faced throughout it.

Abby does pull a happy face when she gets to read her own version of “A night Before Christmas” to Cathy. It’s an “I hate you” letter written in a cheerful rhyme. Cathy has her own Christmas story to read but no matter how much she tries; she still doesn’t top Abby. Not even with words. Christi beats her too when it she reads her lyrical rhyme for both Abby and Cathy. This is their version of “warm and fuzzy”.

For the first time the Dance Dads get to be heard. They’re sweet guys and sometimes they feel Abby can be hard but their daughters love dance. Abby likes hearing from them and yet she points out that only two dads for seven of the girls showed up. What happened to the other dads? They may not be interested but they should have come to support their kids. Abby has seen Christi’s dad once in the last couple years. He’s never helped out and has kind of disappeared. Christi says Abby was too rude to him and that’s why he doesn’t like to participate. He helps out by running the house smoothly while she’s with her daughter for competition.

Actor and recording artist Coco Jones performs “Good to Be Home” for the audience. Giving the kids time to get all dressed up to appear onstage for their own Christmas gifts. Abby was kinder with than she was with their mothers. Mia got $2,000 worth of baking equipment. Kendall got $2000 worth of make-up. Brooke got a home recording studio. Her sister Paige was gifted with vanity set. Chloe got books, an e-reader, and a lifetime gift card for a lifetime supply of books. Maddie was gifted with dance equipment and a 5,000 gift card. Lastly there is Mackenzie, she received a puppy. Her gift drove her to tears. Finally, Abby made a kid cry in a good way.

Merry Christmas to all from Abby’s Dance Company! But what will next season hold?