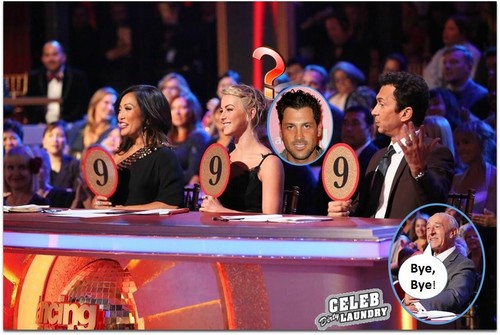 Julianne Hough recently replaced acerbic judge Len Goodman on Dancing With The Stars.  After her appearance fans of the show hoped it would be her last stint as a judge. Bad news, her special appearance may have actually have been a job interview.  NO!

Julianna’s inappropriate critique of professional dancer Mark Ballas and Christina Milian side-by-side foxtrot left fans screaming.  After their dance, she said, “I really want to see Christina shine. I’ve danced with Mark. You have to stand in front to make sure you’re seen.”  Many believed that Mark and Christina’s who were font runners, elimination last week was directly as a result of comments Julianne made.

Word on the street is that DWTS whose ratings have been dropping season after season may have decided to put 69-year-old Len  out to pasture and replace him with younger and hipper Julianne.  According to The National Enquirer, they are hoping that with someone younger they will attract new viewers to the show.  There are two things going against Julianne: she wants a big movie career and fans are not happy with her.  But considering the fact that she cannot act, the DWTS job just might start looking good to her.

Another candidate for the job DWTS is considering is former dancer, Maksim Chmerkovskly.  He was recently asked if he would consider it and he replied, “Absolutely!  I want it to have the ratings we used to have!”  I think he would be a much better replacement for Len.  Let’s face it, he has several things going for him: he is hot, he is hot, and he is HOT!

What do you think CDLers?  Who would you prefer to replace DWTS judge Len, Max or Julianne?