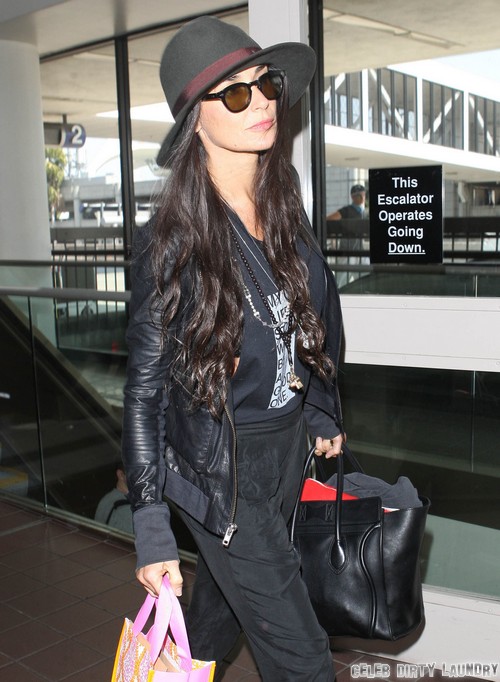 Is Demi Moore still hung up on Ashton Kutcher? According to the latest report from the always reliable National Enquirer, Demi Moore is ‘obsessed’ with Ashton Kutcher and is desperate to watch his latest movie JOBS.

Apparently, Demi’s asked for a private screener of the movie, with a source adding, “Demi’s scared to get caught going to see Ashton at the movies — that’s why she wants to view it in the privacy of her own home. She’s even considered disguising herself and taking the plunge, but knows she’d be so embarrassed if she was caught watching it by anyone.”

The source also adds, “Demi knows there’s no chance of Ashton taking her back, but she just can’t seem to shake her obsession with him. She even taped all his TV appearances promoting Jobs and just keeps watching them… over and over again.”

Hmmm. As much as most people wouldn’t be inclined to believe this, I am not ruling it out completely. While I don’t think that Demi watched Ashton’s TV appearances ‘over and over again’, I’m sure she’s making an effort to keep track of him and his career. It might be a masochistic tendency, considering how happy he seems with Mila Kunis, but hey, sometimes you can’t help it.

While Demi has supposedly moved on from Ashton, I always got the feeling that she never really ‘moved on’, and that she was still hung up on the guy. She’s keeping busy with her career right now, which is a good move for her, but I really hope that they don’t run into each other at any major events because that might be really awkward for her – especially if she’s still ‘obsessed’ with him.

What do you guys think? Is Demi Moore still obsessed with Ashton Kutcher? Let us know your thoughts in the comments.