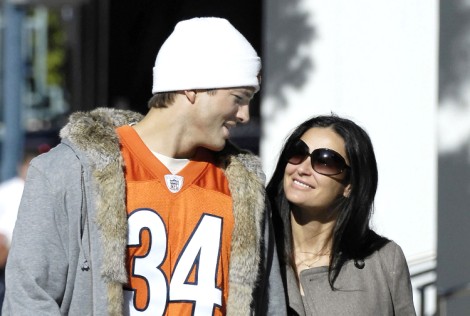 I think Demi Moore got the message wrong. As I’ve said countless times before, I wanted her New Year’s resolution to be all about cleaning up her sad sack image. I want her to dress and act slightly more her age. I want her to work more and cry less and GET OVER ASHTON KUTCHER.

And she sort of heard me. She defended herself after Ashton filed for divorce three days before Christmas by saying she wanted to do it months ago. She stayed out of the headlines over the holidays. There were no 911 calls or last minute efforts to reunite with that boy toy. Dare I say it, is Demi on the mend? Of course not! It’s Demi Moore. Now magazine has this uber annoying story about how Demi is all about making Ashton pay for ruining her life. The only problem is that Demi Moore’s revenge makes her look even more pathetic.

“She’s obsessed with settling scores with Ashton and is being very strategic about who she’s seen with,” an inside told Now magazine. “She wants to make him insecure about who she’s dating. In her mind she’s in the midst of a small scale psychological war with him.”

OK, let’s forget that this isn’t high school for a second. I would be down with something like this if it was a few months after they split in the first place. Ashton cheated and treated her like shit so she had every reason to be thinking all crazy like. But it’s been over a year. He’s quite obviously moved on with one of the hottest and coolest chicks in Hollywood. He’s not going to be feeling insecure about that any time soon. Trust.

Why now is she obsessed with settling scores? That should have been her first plan of action. Now it’s just lame. The only way for Demi Moore to reclaim any dignity is to just move the hell on. Ashton’s through playing games. He’s getting serious with Mila Kunis and I’m sensing an engagement/baby announcement in 2013. Planning hot fake boyfriends is not going to combat that. The only way to get over this divorce is to stop talking about the divorce. Demi Moore is fixated on it so much I doubt she even remembers she had a hot career and drool worth body before she even met him. Not a good start, Demi. Not a good start.