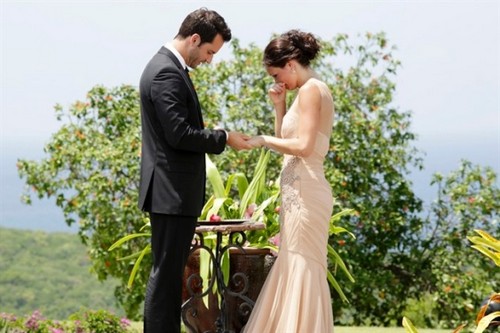 It looks like it’ll be game over in no time flat for former Bachelorette, Desiree Hartsock and her second choice Chris Siegfried. The new couple recently revealed themselves to be engaged on ABC’s After the Final Rose special, with Des insisting that Chris was really the right guy and not just the one she is settling for as has been alleged.

According to the Aug. 26th print edition of In Touch Des and Chris were recently sharing brunch at LA’s Novel Cafe and they looked a whole lot less than happy. Instead they were knee deep in a serious conversation and onlookers thought there appeared to be problems already. Even Des’ brother Nate Hartsock has spoken out saying that while Chris seems to be a great guy, he can tell that Des isn’t really invested.

It sounds like a case of Des knowing in her head that Chris is a catch, but not really feeling the connection in her heart and without that, they are doomed. The real world is a whole lot different than Bachelorette reality too. Anyone can be over the moon when they spend weeks dropped in paradise with no financial worries and every luxury at their finger tips. Once the couples come back to reality its rarely the same. That’s when they realize that they aren’t really compatible. I don’t think anyone believed that Des is in love with Chris. She was simply committed to the idea of coming home engaged and whomever offered the proposal was secondary! Do you think Des and Chris will make it down the aisle? Tell us your thoughts in the comments below!