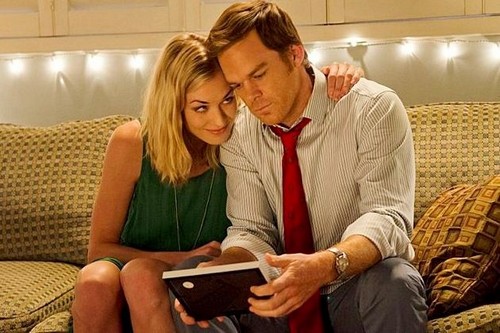 On last night’s episode 9 of DEXTER the episode opens up with Dr. Vogel having breakfast with her melon baller son Daniel. Daniel is not being very son like and makes fun of her when she brings up her feelings about motherhood. She explains that she didn’t know how to help him. Daniel tells her that now she can seeing as how she helped Dexter. Daniel reminds his mother that she taught Dexter how to cope with his condition and gave Dexter a life while she let her son rot in an institution. Vogel begs Daniel to let her help him and tells him she’s sorry for all she’s done. Daniel tells her he wishes he could believe her and walks out.

Debra comes home and sees Dexter and Harrison with Hannah and looks stunned. Debra and Dexter go outside and Debra immediately bitches at Dexter about Harrison being around Hannah (sigh). Dexter tells Debra that him and Harrison are moving to Argentina with Hannah. Debra tells Dexter what a idiot he is in a f word laced tirade.

Dexter won’t be deterred, he wants a life with Hannah and this is the only way he can get it. Debra then starts bitching about how Dexter is being selfish by leaving ( isn’t that what she has been telling him to do all freaking season?). Dexter tells Debra they can visit each other. Debra per usual gets pissed and walks off.

Quinn and Jamie are meeting for lunch. Jamie tells Quinn about a job interview she got in Atlanta but that she is turning down. (Then why in the f is she telling him about it?) Quinn tells her that she needs to do what’s best for her and that they will find a way to make it work.

Matthews and Vogel meet in his office for a chat. Matthews ask her about Zach. Vogel tells him she can’t tell him anything due to doctor, patient confidentiality. Vogel excuses herself and leaves.

Dexter is looking up information on Daniel. Dexter sees Vogel and ask her what she is doing there. Dexter tells her again that is dangerous for her to be around Daniel. Vogel stubbornly insist that he won’t her ( this lady is going to be dead by the end of this episode, because I know how this show works). Vogel admits to Dexter that she saw him for breakfast yesterday and that she didn’t tell him because she doesn’t want Dexter to kill him. Vogel says she has to establish trust with Daniel so she can win him over and then she can get him back into a institution. Vogel tells Dexter not to be a hero on her account and leaves. Harry shows up and tells Dexter he can’t leave this unfinished and that he has to kill Daniel. Angel walks up and tells Dexter that he has a crime scene he needs him at.

Debra is having lunch with Quinn and tells him that she is upset that Dexter and Harrison are leaving to travel the world. Debra says she knows change is good. Quinn says and sometimes change is necessary (is that right now Quinn, wonder what it is you want to change…girlfriends perhaps). Debra tells Quinn that Angel gave her badge back, Quinn is elated. They start joking about being partners again. Quinn gets the text about the crime scene and has to leave.

At the crime scene it is a bicyclist who flipped off a motorist you got pissed and decided to run him over (road rage, it’s a killer ya’ll). When Nikki shows up she gets in a fight with Vince because she is high and he wants her to quit smoking. Nikki informs him he can tell her what to do at work but not in her personal life and then she storms off like a spoiled little brat.

Dexter goes up to Angel and tells after Rita’s death he needs a break and he is leaving town. Angel wishes Dexter the best. Dexter ask him to please keep it a secret for now. They know Jamie will miss Harrison because she loves him, but Angel thinks that this will help Jamie to move on too. Angel gives Dexter a big hug and tells him he always has a job.

Back at Debra’s Hannah wants to know how Dexter is doing with finding Daniel. Dexter tells her that Vogel is the way to Daniel and maybe all he needs is Vogel’s computer.

Dexter uses Vogel’s emergency to get into her house. Dexter logs onto her computer and reverses the bug work on Daniels computer. Dexter watches some of the videos Daniel has sent and sees that one is of him killing Zach. Dexter uses a USB to copy the files. Harry tells him he has to protect Vogel so that it won’t haunt him.

Angel is on the phone placing a job ad to replace Dexter. The Marshal stops by and tells him he can’t find anything on Hannah and that she is moved back down to low priority. The Marshal ask Angel who is leaving. Angel tells him it is Dexter (damn it Angel, didn’t Dexter ask you not to do that?).

Quinn is with Jamie and he tells her he doesn’t thing that him and her are going to work. Jamie wants to know why he moved in with her then. Quinn tells her that he thought things would get better. Jamie thinks its because he wants to go back to Debra. Quinn tells her it isn’t. (Liar).

Debra looks on at Hannah, Dexter and Harrison on her patio.Debra is upset. Dexter sees her. Hannah notices her too. Dexter to check on her. Dexter hands her a beer . Debra tells Dexter she wants him and Harrison to be happy. Dexter asks her how she feels about them leaving. Debra tells him that she’s scared because her family is leaving. Debra tells Dexter that he has always been there and she doesn’t know what her life will be like without him. Dexter tells her that her life will be better.

Dexter is looking for places to live in Argentina. Dexter calls Hannah who is on the beach with Debra and Harrison. Dexter tells her he just wanted to hear the sound of her voice. Dexter hears a knock at his door, it’s Vogel and she wants to talk.

Vogel tells Dexter that a new beginning far away might be the best thing for him. Vogel tells him that there’s hope for Daniel. Vogel tells Dexter that if he doesn’t kill him then Vogel will have a chance with him. Dexter tells her that Daniel does like to kill and shows her the video of Daniel taking pleasure in murdering Zach to refresh her memory. Vogel ask him what’s next and Dexter tells her that she knows what’s next. Daniel has to die. Dexter tells her to get Daniel in a public place and that he will follow Daniel when he leaves and take care of it. Vogel ask Dexter to please not make Daniel suffer. Deter promises that he won’t.

Harrison gets on Debra’s treadmill and turns it up on high. He falls off and bust open his chin. Hannah takes him to the emergency room and pretends to be his mom. Two nurse act like they recognize Hannah. They call Harrison and she takes him back to the room.

Dexter is prepping his kill room.

Debra is walking into the police station as Jamie is walking out. Debra tells her
Hi and Jamie replies with a go f yourself. Debra tells Angel she is ready to come back but would like a few weeks. Angel tells her to ignore Jamie that she was upset because her and Quinn broke up and Jamie thinks its because he wants to be with Debra. Debra finds Quinn and ask him if she is the reason he broke up with Jamie. Quinn admits he still has feelings for her but doesn’t expect anything from her. Jamie tells Quinn that she still has feelings for him to but before it always felt like something was holding her back but it’s not anymore. Debra kisses him.

The Marshal is in the hospital with the nurse. He ask her what the child’s name was. The nurse tells him it was Harrison Morgan (busted).

Dexter’s phone rings and its Vogel. Vogel tells Dexter that Daniel will be at her house. Dexter has the WTF look on his face. Dexter reminds her she was supposed to meet him in public you know where it’s safer. Vogel’s door bell rings and she tells him that she wanted the last time she saw Daniel to be in private. (Last time is right) Vogel hangs up.

Vogel is pouring tea for her and Daniel. Daniel ask what she wanted. Vogel tells him she just wants to talk about “normal” things (Of shoes and ships and sealing wax. Of cabbages and kings. And while the see is boiling hot. And whether pigs have wings).
Daniel ask her what’s wrong and that she seems tense (she is so a goner). Vogel tells him she is just a mother who constantly wants her son around. Daniel tells Vogel he knows what fear looks like, he’s seen a lot of people die. Daniel ask her what she’s so afraid of.

Dexters phone rings and it’s Daniel. He flips the light on in Vogel’s house so Dexter can see them. Daniel tells Dexter that his mother picked the wrong son and then he cuts his mother’s throat. Dexter runs inside the house as Daniel takes off. Dexter watches her die and then holds her in his arms and cries.