Dianna Agron Returns to Glee – Is Her Feud with Lea Michele Over? 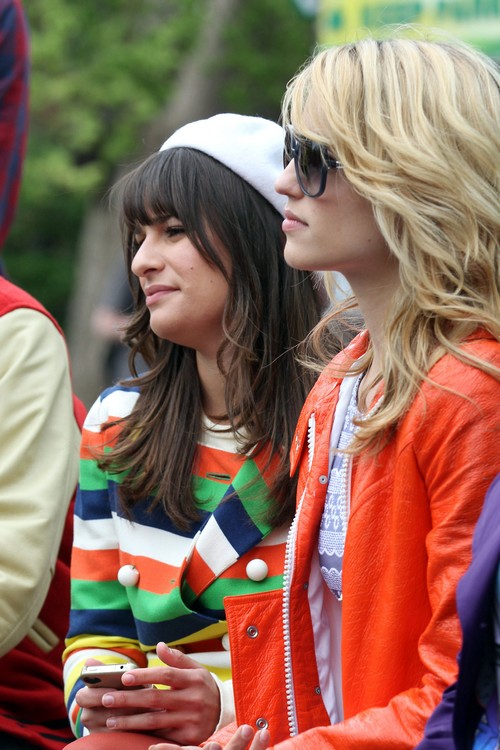 In happier news, Dianna Agron is set to reprise her role as Quinn in Glee’s 100th episode. This may seem odd but the announcement of her return means more than action packed hour for the Fox channel. Her reappearance could be a subtle way to say whatever beef went down between Dianna and her former bestie Lea Michele could very well be over.

Although the stars tried to downplay what was going on behind the scenes, many fans including us here at CDL pretty much figured something was wrong when Dianna didn’t show up at Cory Monteith‘s Tribute episode. She was after all a close friend of his as well as a long-time co-star. Yet she claimed she had work obligations. Sorry Dianna but  a quick search on your IMDB profile shows us your only pressing concern at the time was promoting “The Family”. And she didn’t really do a good job on that front because the movie flopped just as much as the rest of her movies have proven to do.

Glee was her most successful gig to date. It’s why she’s still willing to come back after Lea and  Ryan Murphy in spite of them snubbing her. But look at it this way: Ryan is basically Lea’s biggest fan and he would never invite Dianna back without Lea’s approval. If she didn’t cave for Cory and is able to do so now means she’s letting bygones be bygones. Dianna must agree with this or how else would she manage to take time off shooting two movies back to back. At least with this schedule she could honestly claim she was working to get herself out of any embarrassment.

All in all its a victory for Gleek fans and I for one am happy with that. It was never a good look to watch two women have a diva fight. This way all the originals can come back to celebrate in what would otherwise be another episode of the Rachel show.