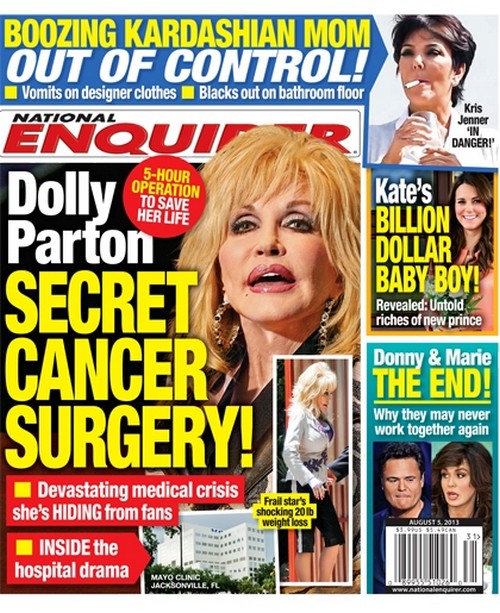 While other celebs have chosen to publicize their recent medical situations, apparently Dolly Parton, when faced with a potential crisis, did just the opposite. After a sudden 20 pound weight loss and not being able to eat anything but super bland foods, the 67-year old country star did her research and realized that she was at serious risk for esophageal cancer. She decided to take quick action rather than waiting for what she believed was inevitable illness.

According to the National Enquirer August 5th Print Edition, Dolly headed to the Mayo Clinic in Jacksonville, Florida for an experimental procedure. A device was implanted into her esophagus with the hopes that it will actually prevent cancer from forming. Dolly was in surgery for 5 hours rather than the 2 hours that had been predicted and shortly after coming out she opted to hop onto her luxury tour bus and head home to Nashville rather than remaining hospitalized. Doctors not affiliated with Dolly say that the procedure itself won’t completely prevent cancer and that she’ll need to be closely monitored for the rest of her life.

Dolly is known to be a class act that always projects a super positive image. In keeping with that she kept her medical crisis quiet and neither family nor fans were aware of her cancer fears or experimental treatment until well after the fact. Sources close to her say that she went through the situation appearing to be tough as nails but of course she was absolutely terrified of the possibility of the procedure not working.

If you were faced with a potential cancer scare, would you consider having an experimental procedure done in the hopes that it could ultimately save your life or at least buy you significantly more time with your loved ones? Tell us your thoughts in the comments below!