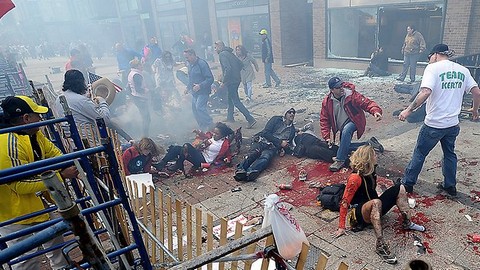 Yesterday’s tragic news of the Boston Marathon bombings still has the whole country reeling with shock, sadness, and anger. There are questions that we are still not able to answer, about who caused the attack and why they did it. For now, the outpouring of sympathy and empathy from all corners of the world focuses on Boston and those affected by the tragedy. Celebrities, especially, have been tweeting steadily since they found out, and Boston natives are particularly affected. Tom Bergeron from Dancing With the Stars is one such Boston native, and his response to the bombings was emotional and heartfelt.

When asked by Extra TV backstage after DWTS wrapped, Tom explained that his wife and daughter were in the city during the blasts, and he found out through her what was going on. He says, “It was the hardest show I have ever done. [My wife] was the one that texted me first to let me know what was going on. She was in lockdown in a hotel… I worked in Boston for years, I know how valuable that marathon is, that last mile was dedicated to the families if Newtown. I’m feeling a mixture of grief, relief that my family’s fine.”

At the end, he simply added, “We love you Boston.” Unfortunately, several others weren’t as lucky as Tom, as the three dead have been identified, including the devastating news that one was an 8-year-old boy. There are still several others in critical condition in hospitals all over Boston, and it’s doubtful that the city will be at peace until everyone’s safe, and those injured are guaranteed that they will make a recovery.  Considering that this is the first broad scale terrorist attack since 9/11, it’s doubtful that this will be forgotten soon, but we don’t yet know whether it was a domestic home-grown threat or a foreign attack. As we find out more, we will keep you updated.