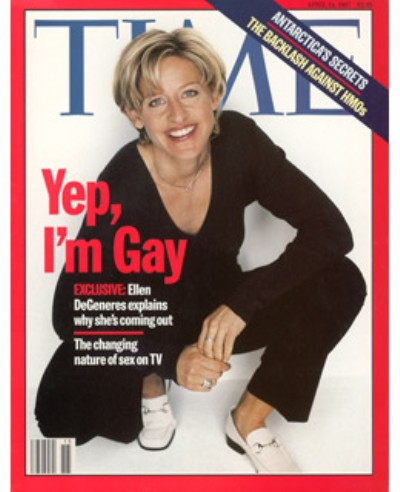 I don’t know what’s more surprising, the fact that it’s been 16 years since Ellen DeGeneres’ Time magazine cover or that she was actually ostracized for doing it. The in-your-face “Yep, I’m gay” headline wasn’t as much of a shock (most people already knew she was a lesbian) as the audacity it took to say the words to middle America. She didn’t work for three years after it hit newsstands.

You wouldn’t know it now though, would you? Ellen DeGeneres and Portia de Rossi are poster children for stable celebrity relationships – straight and gay alike. Ellen’s got a hit show and continues to make us laugh with her stuttering humor and clever incites. Seemingly she is loved across all party lines. Ellen DeGeneres’ coming out gamble paid off in huge ways. How did she manage to do it?

I can’t help but compare her to fellow comedian/talk show host/lesbian Rosie O’Donnell. Rosie is Rosie. She’s hilarious and loud and successful but isn’t as universally loved. After she came out she buzzed her hair in some interesting styles, had a bunch of kids as well as some relationship issues and failed to keep her audience along the way. It’s almost as if people thought the talk show version of Rosie wasn’t the true version (who can forget “I love Tommmyyyy!”?). Was it less of a struggle to accept Ellen because she didn’t outwardly change as much or is she just less threatening with her vegan diet and hot wife? I don’t mean to oversimplify. Both women are comedic pioneers who have had major highs and lows in their professional and personal lives just like everyone else. They just happen to be gay. Perhaps Ellen just navigated the post-coming out waters better. Finding Nemo was huge for her career resurgence in 2003 and she’s ready to get behind the mic again for the upcoming sequel which is super exciting.

Ellen helped American get over itself and realize that sexuality isn’t as important as laughter. I’m sure she probably just got into show business because she wanted to be known as a great comedian but she’ll leave being so much more.

Why do you think America accepted Ellen instead of shunning her like it has other entertainers who have come out? Looking back, do you think she made the right decision to go on the cover instead of announcing in a more low-key way?