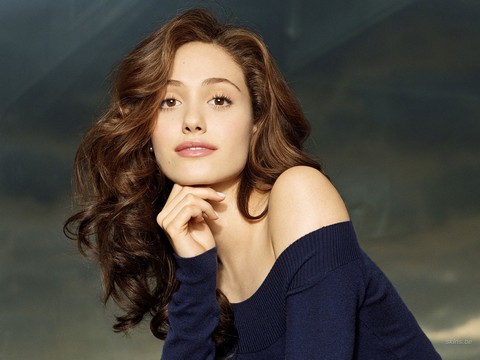 Harsh words for someone whose biggest acting job lately seems to be a commercial for cotton! Emmy Rossum became a household name after starring in the film adaptation of The Phantom of the Opera, and though I’ve seen her around, I couldn’t really tell you what she’s been doing since. But the actress is keeping tabs on everything in Hollywood, including the infamous Bachelor franchise—and she doesn’t just watch, she’s addicted and loves this year’s bachelor Sean Lowe!

The singer noted that the Bachelor mansion “has so much booze in it,” and that viewers never “see these girls eating.” It’s true too! Haven’t you noticed that they always finish their dates with the food untouched? It makes me wonder if it’s all plastic or inedible! When do they eat? What do they eat? We’ve seen them drink heavily during cocktail parties, so it doesn’t seem like a huge reach to say the drama is artificial—or at least spurred on by an open bar!

Emmy sympathized (kind of) with the women, noting that she “would have a meltdown too” in those conditions. Emmy isn’t the first celebrity to come out as a viewer—Ellen DeGeneres has admitted that she’s helplessly hooked, and Selena Gomez does a hilarious impression of Chris Harrison saying, “Sean, ladies, this is the final rose. When you’re ready.” I guess it isn’t crazy for established actors to respect the staged drama and on-demand tears the women sprout!

This season, Sean has narrowed his choice to three women, who will enjoy overnight dates in Thailand before the final rose ceremony. We’ve known spoilers for months now, but that doesn’t lessen the fun of watching their lavish dates and exaggerated intense moments. Of course, there will be plenty to drink at their resort, so we expect the drama to increase exponentially as the proposal draws nearer. Do you think Emmy is being unfair, or is The Bachelor totally faking the drama by keeping its contestants starved and drunk?