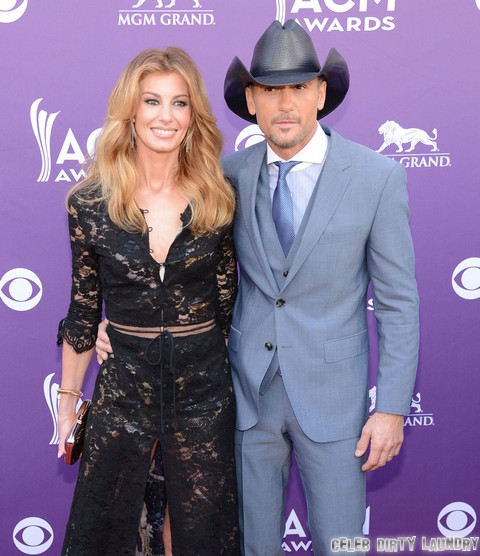 Is Faith Hill cheating on Tim McGraw with Kenny Chesney? The latest issue of the National Enquirer claims that Faith’s marriage with Tim is on the rocks, because what else is new? After Tim was spotted without his wedding ring, the rumor mill sped into overdrive about how Tim and Faith were on the precipice of a divorce. However, the report from the Enquirer alleges that Faith has threatened Tim with a massive divorce if he doesn’t put his wedding ring back on. Not just that, but the report also claims that Faith has been turning to comfort from an unlikely source: Kenny Chesney.

Also a country singer, Kenny Chesney seems like he would be just Faith’s type, and it wouldn’t be surprising to find out that the whispers of a possible hookup between them turn out to be true. After all, her husband’s probably a dickhead who continuously cheats on her, and she feels insecure and turned to someone who treats her a lot better. It’s not the first time this sort of thing happened, and it won’t be the last.

Now, most of the cheating rumors surrounding Tim seem to be centered around his relationship with Taylor Swift, which is a little hard to believe. That being said, does anyone doubt that Tim is not exactly the most faithful husband in the world? I mean, are any musicians, really?

What do you guys think about the rumored relationship troubles between Faith and Tim, and why do you think he took off his wedding ring? And do you think Faith is cheating on Tim with Kenny to get back to at him, or because she’s genuinely lonely? Or do you think she’s not cheating, and everything between the couple is completely fine? Let us know your thoughts in the comments.