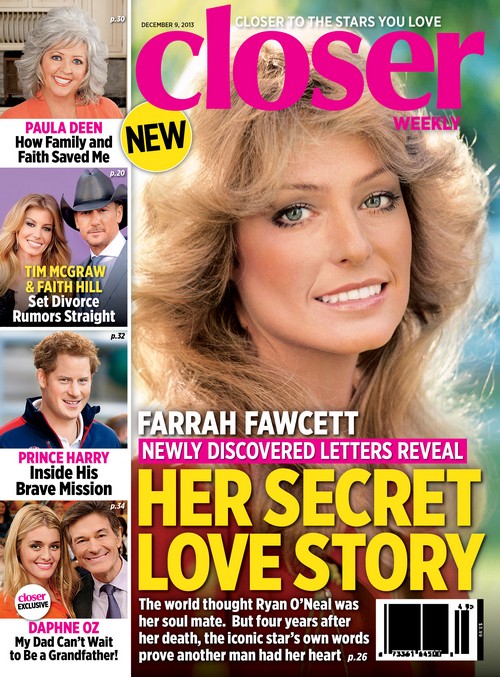 According to the latest issue of Closer Weekly, Farrah Fawcett was having a secret love affair. At this point, people should really stop being so surprised when it turns out that major celebrities have affairs. Mix in attractive people with money and fame, and that’s a potent mixture.

Anyway, Closer claims that newly discovered letters written by Farrah reveal that she might have been having a secret affair with another man, someone who was NOT Ryan O’Neal. It’s been more than four years since her death, and these letters have just surfaced, so there’s no way of proving anything. But Farrah and Ryan had an explosive relationship, and she could very well have turned to someone else for comfort, even as the world continued to think that Ryan was her ‘soul mate’.

Closer also has an exclusive interview with Daphne Oz, and her revelations about becoming a mother. They also have a feature on Prince Harry and his charity trek to the South Pole, which should an interesting experience for him. It’s risky, definitely, but at least the royals let him do it. They know the busier Harry is, the less likely he is to get up to his old shenanigans.

Tim McGraw and Faith Hill have also opened up about the cheating and divorce rumors for the first time, claiming that they’re all false and that their marriage is happier than ever.

And finally, Paula Deen continues on her image rehab mission, but she’s not doing a very good job of it. She reveals that her family and faith ‘saved her’ after everything she’s gone through recently, but will people buy it? Only time will tell.