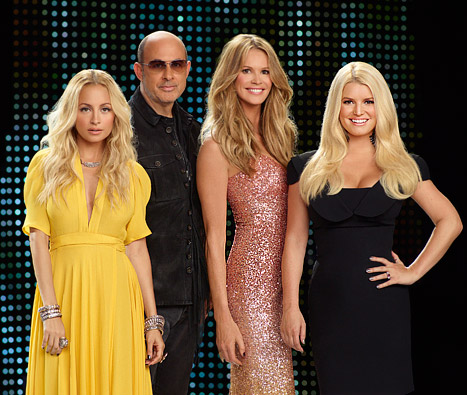 Have you heard? The NBC big wigs have axed yet another show. This time they’re cancelling Fashion Star. You know where unknown designers got to sell pieces directly to department stores and the judges were kind of just ornamental. Yeah that show.

It’s sad though. Here was a regular paycheck to Nicole Richie and Jessica Simpson. The two are already mega-rich but more can’t and never will hurt. I bet their especially mad with how the show ended. Reportedly the show was off to a strong start but had begun to flat-line during its second season. Hmm… what changed during the second. Oh yeah, there was no Elle MacPherson.

The Australian bombshell remained on as producer but left the hosting duties to someone – I can’t even remember their name. This right before Elle dropped another surprise like her engagement to billionaire boyfriend. Guess she figured she didn’t to be a host what she got her hooks into that sort of money. But way to screw over everyone else at the show.

The cancellation isn’t all Elle’s fault when you think about it. It’s a problem seen in a lot of reality shows. They were merely remakes of hit shows. How many fashion reality TV can there honestly be? They all look the same as if they were the multiple singing competitions.

Sorry but too much of the same thing is a waste of space on my DVR. Anyway the girls are all too busy. Nicole has to keep watch on her drug using husband, Joel Madden. Jessica recently had a second baby. Elle has to plan her wedding, so does Jessica, but Elle’s is more likely to happen. I don’t know the third judge’s name. Does anyone know what it is? I feel badly that I don’t. Oh well; spilled milk!