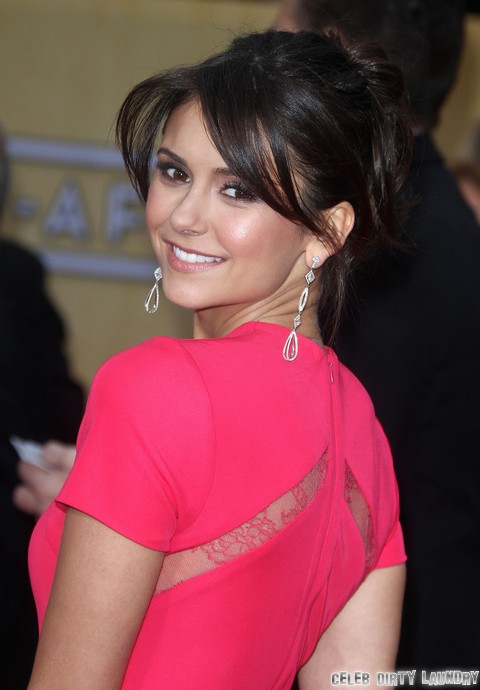 It isn’t often that TV celebrities enter the top tier of celebrity, but Nina Dobrev and boyfriend Ian Somerhalder have crossed into the realm of royalty. Whether it’s because they are effortlessly chic, star on one of the hottest TV shows in the history of vampire stories, or because of their work with ISF (Ian’s foundation to protect the environment) is hard to say. I think it’s a melee. But at this weekend’s SAG Awards, Nina cemented her role as a Hollywood elite, dropping jaws with her gorgeous hot pink Ellie Saab dress.

Nina has made it onto the best dressed list of several news agencies, including one from RYOT News, for which Ian serves as an advisor. The site operates on the idea that every news story should offer readers a way to get involved. Well, in a move that can really only be called nepotistic—or maybe romantic in overreaching influence by Ian—Nina earned top prize, and was named Best Dressed of the night. “We’d like to extend a special shout-out to Nina Dobrev,” RYOT wrote, “a talented actress with great taste in fashion, and even better taste in men! Her boyfriend, Ian Somerhalder, is doing some wonderful things for the animal kingdom. The IS FOUNDATION aims to positively impact the planet and its creatures.”

While the shout out is rooted in kindness, and Nina did look fabulous, the award seems rather insincere! It also seems bizarre to applaud Nina for her boyfriend’s work—outside of vocal support and the occasional on-site volunteer day, Nina isn’t at all involved! Regardless of what she wore, one thing is certain: Nina has broken into the penthouse suite of A-list celebrities, and was welcomed with open arms.