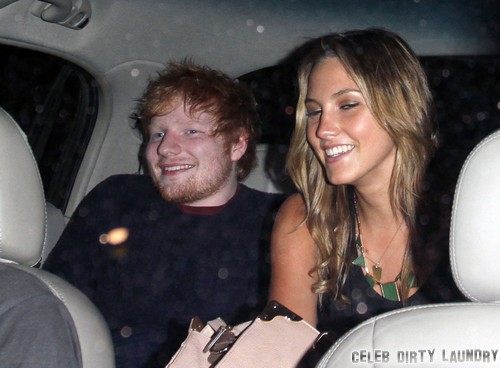 Although Ed Sheeran has been linked to practically everyone in young Hollywood lately, he’s most recently been spotted with Francesca Eastwood, daughter of Clint Eastwood and Frances Fisher.

The duo were spotted at a club called Hooray Henry’s in Hollywood, CA, but Ed ended up leaving the party with another mystery blonde. Looks like he’s enjoying his single and famous status, eh?

Ed has previously been linked to everyone from Taylor Swift to Selena Gomez, and he has steadfastly denied most of the rumors. He and Selena seemed to have had a brief fling, but it ended pretty quickly. For what it’s worth, Ed seems like he’s just having fun right now, as is befit of most celebrities his age. He’s only 22 years old, and is at the top of the world right now with a major tour and bestselling album.

He’s also good friends with Harry Styles of One Direction, and we know Harry’s ways with the ladies. Don’t be surprised if Ed follows in his footsteps.

Francesca, on the other hand, usually travels more in the Hollywood socialite circles, and despite her parents being the legendary stars that they are, she seems like she’s more into the reality television crowd than anything else. A crying shame, but today’s generation seems to think that’s preferable to working hard and taking the longer route to fame and fortune.

Francesca has also been previously linked to celebrity photographer Tyler Shields, but there were no reports on the couple breaking up, so it’s likely that they’re still together. Either way, she didn’t leave the club with Ed, so they probably didn’t know each other or ran into each other at the club for the first time.