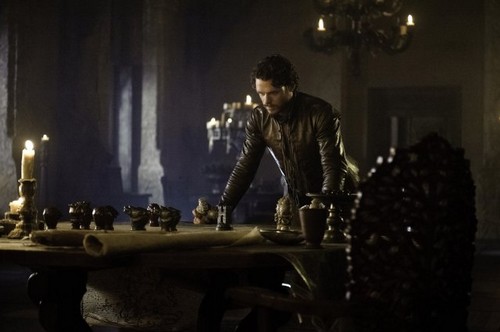 On tonight’s GAME OF THRONES the action did not stop again.  I almost feel like I have to watch the episode twice to make sure I did not miss anything, I cannot wait till next week.  The season is really shaping up to be an exciting one.  Next week’s episode is called, “Kissed by Fire” and we have managed to get our hands on some juicy spoilers and a sneak peek video of next week’s episode.

On tonight’s show we found out that Vary’s and Lady Olenna Tyrell were as thick as thieves, they both have a common goal, to save Sansa Stark.  Vary’s admits to Lady Olenna that he admired Ned Stark and he wants to save Sansa.  Vary’s tells Lady Olenna that Sansa is the key to the North.  They hatch a plan to marry Sansa off to Lady Olenna’s grandson, Loras.  All they have to do now is to try to stop Lord Peter Baelish from taking Sansa.

We did not get to see Jon Snow tonight but there was a death in the Night Watch, and as we thought the Lord Commander was killed.  He was not killed by a Wilding, he was killed by Rast, a member of the Night Watch.   Daerney got her 8,000 unsullied slaves and she did not not lose any dragons.   Cersei was not pleased with Margaery’s influence on Joffrey and expresses that to her father, Tywin.  He tells her she is not as smart as she thinks.  Jamie and Brienne are still traveling with the Boltons (Brave Companions), not much new happened with them.  There was a whole lot more, did you watch tonight’s show?  We did and we recapped it for you HERE!

Spoiler alert: If you’re one of those people who doesn’t like spoilers, stop reading now! We have some juicy spoilers for you about the season 3 episode 5 HBO’s “Game Of Thrones.”

HBO’s Official Synopsis:  The Hound (Rory McCann) will end up ,getting judged by the gods. Jaime is going to be judged by men. Jon will end up ,proving himself. Robb (Richard Madden) is going to get betrayed. Tyrion will find out the cost of weddings.

On next week’s show,  considering the title “Kissed By Fire,” I am sure we are going to have some episodes with the Wilding Girl Ygritte.   The title is a phrase used by the wildlings to describe people who are red-haired. Ygritte is described as “kissed by fire”.

Beric Dondarrion the leader of the Brothers without Banners has decided that the Hound will face trial by battle for his crimes.  The Hound will battle Beric next week.  Beric calls on the Lord of the Light to show them wisdom and show them the truth.  Why do I think this is not going to end well for Beric.

Jamie Lannister and Brienne of Tarth are still with the Boltons and they are still treating Jamie pretty crappy.  They bring Jamie to Lord Volten and boot Jamie onto the ground where he face plants and says, “I give you the King Slayer.”

Rickard Karstark a recurring character tells Robb Stark that, “In War You Kill Your Enemies. Didn’t your father teach you that, boy?”

Lord Tywin meets with Cersei and Tyrion and their father tells them, it is a plot and they need to act first.  Cersei looks smug, Tyrion says, “You cannot mean it” and we then see the face of Sansa.  I wonder if they found out about Lady Olenna’s plan to marry Sansa to her grandson, Loras?  If they stick to the book they will soon be marrying Tyrion to Sansa.

Next week we are 1/2 way through the season and they are setting the stage for Daenerys, her army and the Dragons to head to the Westeros and next week we get to see even more of Daenerys.  I will be curious once she gets to the Westeros who she is going to align with, there are so many options.  I would love to see her and Robb Stark hook up, but again, if they keep to the book, that is not going to happen.

Although we did not get to see Jon Snow last week he is back this week.  Giantsbane, a trusted leader in his own right of a large warband of wildlings tells Jon, “I like you boy, I’ll pull your guts out through your throat. “ Nice!  Jon ends up proving himself to the Wildings.

What did you think of tonight’s episode?  Are you enjoying this season as much as I am?  Hit the comments and let us know your thoughts!

The Game Of Thrones Season 3, Episode 5 “Kissed By Fire” airs on HBO on April 28st, 2013. Check out the preview videos from episode 4 below and let us know in the comments below what you think!