George Clooney Has Been Cheating On Stacy Keibler With Eva Longoria For Last Six Months! 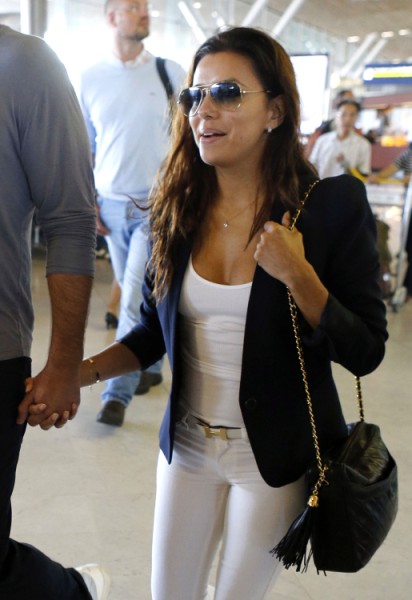 Ahh! This is so annoying to me because I called it a couple of days ago when I first read the blind vice. Lainey Gossip originally put it up and, although it screamed George Clooney, I wasn’t as sure about the Eva Longoria connection. You can read it here. I assumed it was Eva but I just couldn’t believe it. Hooking up with Clooney seemed like the last thing she would want to do since she already has a failed marriage with a cheating womanizer. I thought she was looking for someone to settle down and have a family with at this point. And she didn’t seem like one of his normal pieces. For one, she’s pretty famous in her own right (not a cocktail waitress or a former pro wrestler) and, let’s face it, she’s a little old for him.

But here’s the lowdown. Apparently over the last six months George has been cooling it with Stacy Keibler and wooing Eva Longoria. George Clooney has been filming his new movie in Europe and she’s been popping up in all the same cities. She kept pressuring him to end it with Stacy and, when he began pussyfooting around, she decided to unleash her new reality romance to the world. Enter Ernesto Arguello – the star of her reality show. It was really a win/win. She could use Ernesto to make George jealous and pimp out her show, Ready for Love, at the same time.

And it worked… sort of. Keibler’s gone and George was all “Come on down!” but now the shit has hit the fan. The press is all over this. Us Weekly has an exclusive from a source saying George pursued Eva but she rebuffed him. Are we supposed to believe that? Who in their right mind would do that? She’s supposedly “flattered” by his crush. Bitch please! She’s just trying to spin the story so she doesn’t look like the desperate homewrecker.

I wonder how this will end though. Will all this initial media hoopla scare George off for good? It’s not like he’ll have a hard time finding another girl for his next Oscar season. And he’s going to have a big one they say with The Monuments Men. Would having a star on his arm like Eva distract from his Oscar run or help him in the end? With George you always get the feeling that it’s all about what works best for him. The girls are always kept happy but he’s always a little bit happier, yes?

What do you think? Did George Clooney cheat on Stacy Keibler with Eva and, now that they’re caught, is Eva trying to spin the story?