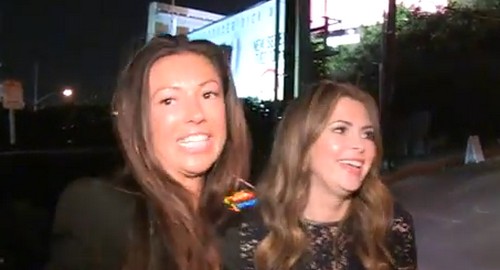 George Clooney can never get a lucky break in love. Especially not in recent history. It seems the older he get the more lax he becomes in vetting these girls. The newest lady friend,a 33 year old Croatian model, Monika Jakisic accidentally got caught confirming some kind of relationship. This may remind people of when Stacey Keibler slipped up at the beginning of her and George’s relationship as well. She slipped and got dump before anyone could blink. Fortunately for her, George took her back. Monika may not have that same luxury.

Who is Monika? All we know is that she’s a model. Well, was a model, seeing as no one has seen recent photos of her. So here she has been dating one of the most well known man in the world and guess where TMZ caught her. They caught her in a hot spot. You know where celebrities go where they want to be seen. She goes there and then apparently never even entered the venue. She merely waited outside playing shy with camera till she was ready to leave.

That why it’s not shocking that she admitted to something instead of nothing like the rest of George’s ladies. She wanted the notoriety and she got it but there will be a coast. George hates it when women talk. Unless you’re on his arm at a red carpet event then you pretend you don’t know him. That’s reserved for friends and family. A woman aiming to be his child bride does not fall in either category.

How hard is to keep your mouth shut. I’ve never listed that as one of my virtues then again I’m not dating someone in the public eye. I suddenly have so much more sympathy for Prince Harry. Finding someone for the job really is hard.