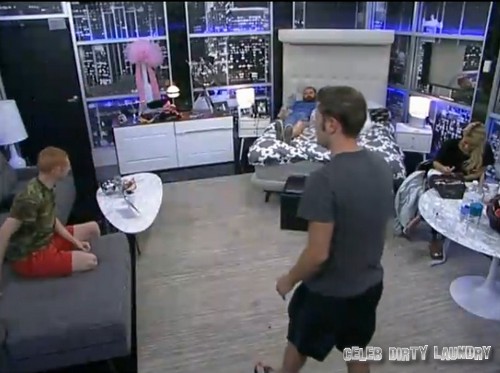 Just when I thought that Amanda Zuckerman was the person I disliked most in the Big Brother 15 house, GinaMarie Zimmerman has taken her place. Actually you can add Spencer Clawson, Andy Herren and Judd Daugherty to that list.

They are bullies – they spent all today on the feeds saying nasty things about Elissa Slater who is definitely the nicest person remaining in the house. Judd thinks Elissa is a brainless, plastic doll. He cannot stand her and basically told her to F**k off today. Judd told Spencer (the ignorant slob) and Andy (the rat) he thinks Elissa is so brainless she goes to the diary room to be programmed. He hurt Elissa’s feelings when he told her to “get the F**K away from him.” Judd claims he cannot stand her and when she comes near him she makes him sick. Elissa does not understand why he is mad at her and swore at her. Judd (the low-class dunce) doesn’t think telling someone to “get the F**K away” counts as swearing.

Meanwhile, Elissa now suspects (correctly) that Andy has sold her out and told The Terminators her plan with Amanda and McCrae.

Andy does not understand how anyone can like Elissa or be friends with her. He thinks that Elissa and her sister must have been F**ked up kids.

GinaMarie jumps in and says Elissa acts like she has autism. Then clarifies by saying, “I work with kids like that and they’re not as quick. Someone needs to slap that girl!” Judd and Spencer tell America GinaMarie did not mean the autism comment. Note to GinaMarie: Then don’t say it.

GinaMarie does not stop there: she compares Elissa to a child she used to work with who was slow and so she had to go slow with that child – but she forgets what affliction the child had. Andy asks if it was Down syndrome, Spencer asks if they were “brain dumb.” Gina says NO, then the rocket scientist remembers and says “autism or something like that.”

If GinaMarie works with children then I really hope she is fired, what an insensitive biatch.

And to add to GinaMarie’s reputation as a racist and a basher of autistic children, we now can formally add anti-Semitism. She commented that she was not jealous of Amanda’s “big F**king Jewish nose and F**king flat ass.”

Meanwhile Elissa is really starting to worry that Andy is not on McCranda’s side. She tries to tell McCrae and Amanda that Andy has flipped but they are convinced Andy is solid. Little do they know. Ironic that the girl everyone think is brainless has figured Andy out.