GLOBE: Pope Francis At Risk Due To Liberal Policies and Modernization of Church (PHOTO) 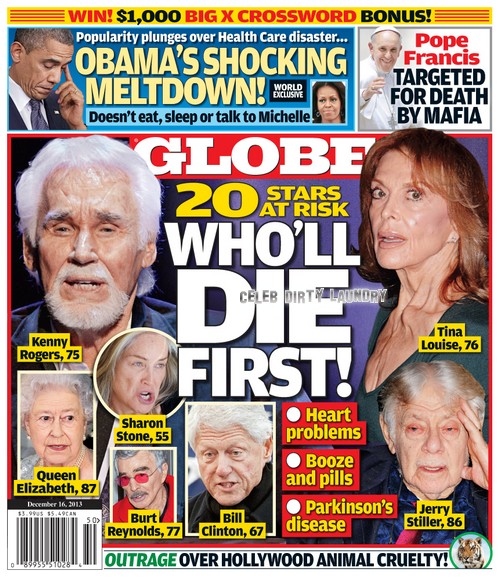 Pope Francis made it clear from the moment that he stepped into his important position atop the Roman Catholic Church that reform was front and center on his agenda. Lapsed Catholics are returning to church after years of scandals made it seem a better option to stay away. Even non-Catholics are impressed with the message that the former Archbishop Jorge Mario Bergoglio is sending since he ascended to lead the world’s largest religious institution earlier this year.

Of course not everyone is thrilled with Francis’ humble approach and according to the Dec. 16th print edition of GLOBE Magazine the leader is the target of death threats from the Mafia. While this may initially sound like a crazed notion, behind the scenes the Mafia has its hooks in many big business and ventures and make no mistake, Catholicism is certainly one of them!

Each and every week GLOBE magazine has its finger on the pulse of Hollywood, bringing readers up to date on some of the hottest scandals around. This time out they are taking a close look at the likes of Burt Reynolds, Tina Louise, Kenny Rogers, Jerry Stiller and even Sharon Stone. These Hollywood players have spent decades in the business and let’s face it, they aren’t getting any younger. Many have serious health issues that could pose grave danger.  GLOBE details these for you in this week’s edition.

Will Queen Elizabeth be the next aging icon to leave us? We have been hearing for months that the Queen’s health is failing. It’s kind of amazing that she has managed to stay so active for so long, don’t you think?

Hollywood stars love their pets and animals as much as you and I do. We often see big names out and about walking their dogs or taking part in animal charity events. GLOBE has recently uncovered a dark side to some of Hollywood and in the Dec. 16th issue you can read about some horrific cases of animal cruelty.

GLOBE reports on President Obama’s putative meltdown over the health care launch disaster. It seems the President and Michelle are not doing too well as Barack is deeply distraught over issues related to the health care program.

Once again GLOBE gets to the heart of what matters to America. Bravely venturing into territory rarely covered by news magazines, GLOBE reports on critical issues facing us today.  My copy is waiting for me and I know that reading it will provide hours of informative pleasure.