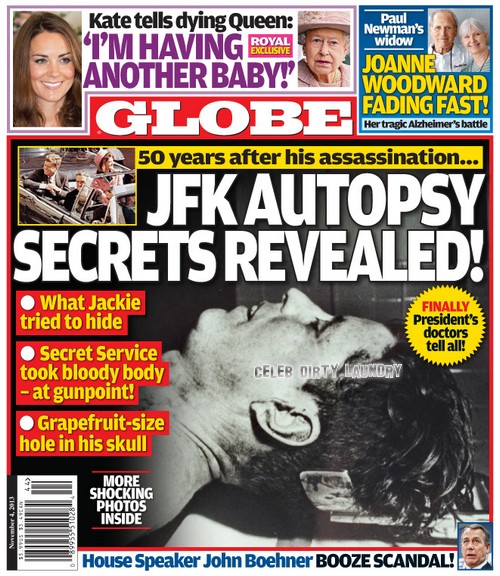 We have been hearing for quite awhile now that Queen Elizabeth’s health is deteriorating on a daily basis and one of the brightest spots for her this last year has been the birth of little Prince George who is being christened today. This child has provided Elizabeth with a real sense of comfort and it helped to solidify her decision to put Prince William on the throne with Kate Middleton as his Queen. While Prince Charles should be the next king according to his birthright, Elizabeth knows that in recent years her son has been reduced to the position of a bubbling idiot while his wife, Camilla Parker-Bowles is a scheming wretch. Not the duo that Elizabeth wants to run her beloved country and she has taken several steps to ensure that it won’t happen.

Kate is very close to the Queen and according to the Nov. 4th print edition of GLOBE magazine she recently promised the monarch that a second baby will be on the way ASAP. Kate wants to bring joy to the queen and she realizes how important it was for her to meet Prince George so she would like to give her the opportunity to meet her second child as well. Obviously Kate knows that there isn’t a lot of time on her side and so she and William are rumored to be trying for another child already.

GLOBE always has its finger on the latest political scandals as well as new information about Hollywood favorites and so uncovering details on John F. Kennedy’s autopsy seems right up their alley! According to the Nov. 4th print edition JFK’s wife Jackie tried to hide some of the secret findings and there are new details of how the secret service proceeded during the traumatic ordeal. The President’s own doctor tells all and GLOBE has details and photos of the autopsy that will shock you!  As the 50th anniversary of JFK’s assassination arrives on November 22nd GLOBE reveals previously hidden material that we all deserve to know.

We learn in this issue that Paul Newman’s widow, Joan Woodward, is fading fast.  Sad news. Her battle with Alzheimer’s is one she can’t win.

GLOBE exposes the John Boehner booze scandal this week – some people are not going to be very happy about this one!

As usual GLOBE is bringing its readers stories this week that you’re not going to find anywhere else, so I suggest you grab yourself the latest issue before they are all gone. In the meantime, do you think that Kate will have another child before Elizabeth passes? What about JFK – are secrets long buried going to emerge that will shed most famous assassination in history? Only GLOBE opens the doors that are locked to other news magazines – I’m certain that this week’s issue will leave me breathless and well informed!

A look at today’s Christening of Prince George