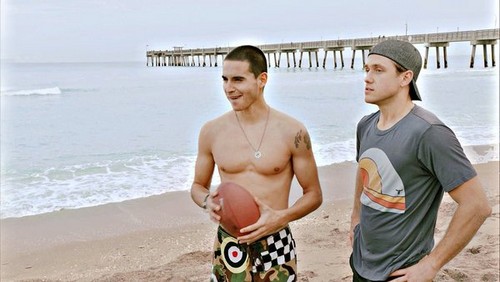 Tonight’s GRACELAND continues on the USA Network with a new episode and the season finale of their first season, called, “Pawn.” On this week’s show the house has to come together to save one of its own.  Did you watch last week’s season premiere? We did and we recapped it here for you.

On last week’s episode looking for the truth about Juan’s disappearance, Briggs and Mike played a dangerous game of cat and mouse- forcing Briggs to make a major decision about his future.

On tonight’s show in this season finale, the infamous Caza enforcer Jangles takes a member of Graceland hostage and the house must come together in order to save one of their own from a sadistic killer.

The show airs tonight on USA Network at 10PM EST and we will be covering it with all the details.  So make sure to bookmark this spot, and come back for our live coverage of Graceland Season 1 finale right here.  Enjoy the show folks!  While you wait for the recap, check out the sneak peek of tonight’s episode below!

RECAP: Tonight on the season finale the last we saw of him Briggs was making a run for it. Mike ignores Paige still trying to plead Briggs’s innocence. He puts an unofficial warrant out for Briggs. That mass text came in while Briggs was in the house but he wasn’t alone. Johnny was there as well. He brought the text to Briggs attention. Johnny something isn’t right and yet he allows Briggs to talk his way out of it and the house.

Briggs does make his escape. He even got DJ to be his runaway driver. The two apparently were close friends than anyone thought. They even had awkward goodbye moment. Briggs went on to help clean up remaining loose ends with those that know him as Odin. While DJ return to the house and tries to play it safe with Feds that will be storming the place.
DJ thought seeing as provided the boat that Briggs fled the country. But Briggs is still in the U.S. He found out Jangles was close at hand and he’s not ready to give up on getting revenge.

The fall out of Briggs leaving goes so far. The feds search the house and they bring in all the agents. One by one they’re all filled in what’s been happening. Charlie and Johnny are completely shocked that Mike is in fact a “rat”. Once everything starts getting glued together than Charlie jumps on board. She’s been suspecting Briggs for a while and she never did give up the idea he was Odin. The only people left proclaiming Brigg’s innocence is DJ, who obviously lying, and Johnny.

Johnny can’t accept that his friend is one of the putting he should have been putting behind bars. Frankly he’s more hurt that Briggs went to DJ for help rather than ask him. He feels the only reason Briggs ran was because Mike and Charlie were trying to pin things on him.

However the biggest concern is that with Briggs missing then Graceland will be closed. Mike knows he can solve this before that happens. For instance he suspects Briggs hasn’t left the country yet. He knows Briggs wouldn’t leave when he is so close to finding Jangles. Paige wants him to let it go and although he cares for her; he can’t get sidetrack. Which is good anyway. Right now he’s too broken for Paige.

Briggs calls DJ for a private meeting. Dj is angry. He’s suspended and facing possible time and Briggs didn’t have the nerve to leave after all he sacrificed. Briggs suspects Charlie’s new friend of being Jangles. He’s trying to convince DJ to continue helping him when DJ asks him out right if he’s Odin. Briggs knows better than to lie so he sidesteps.

DJ no longer trusts Briggs. That’s why when Mike tried to smooth talk him he didn’t say anything, he’s not a rat, but he did leave a piece of paper with a number on it behind.

Briggs used an unknowing Charlie to find Jangles. He follows him to where he’s staying and tries to attack him. What he hadn’t counted on was that Charlie would show up. She didn’t want to drink alone and so she returned for “company”. After she arrives on the scene she immediately her gun on Briggs. Never listening to his claims about Jangles.

Briggs gets knocked out and it’s only later once she’s restrained technically her only back-up does Charlie thinks to question Cortez. Too bad he’s been in this game long enough to know when someone is onto him. They fight over the gun and it goes off.
Mike in the meantime used the tracking number DJ gave him.

Charlie is alive but not for much longer. She and Briggs are being held hostage. Jangles is moment away from carving Charlie like a turkey when Mike arrives on the scene. Jangles hear him and goes to investigate. Luckily Mike is a quicker shot than the infamous Jangles.

The night isn’t over yet. Mike does rescue Charlie and Briggs but he needs to talk to Briggs before the cavalry arrives. Briggs finally reveal the rest of his story. Jangles got him hooked so that he would give up his superior officer. At first Briggs was strong but he didn’t last through his brutal withdrawal. Juan was right. The people in his former house did die because of him.

In the end Mike is congratulated for his effort in taking down Jangles but he’s surprised to learn that Graceland will still be standing. It seems Briggs manages to sneak Juan’s keys onto Jangles’s set. The keys that were on there were all trophies of his victims. The feds believe Jangles killed Juan and they’re proclaiming Briggs to be innocent enough to return to work.

Briggs returns to Graceland and what about Mike? He’s thriving in his dream job in Washington D.C. The two guys occasionally talk to each other and relive their glory days. But on this particular call Briggs says he’s coming out for a visit. He has something tell Mike. Would it have to do with the missing tape of him killing Juan being found?