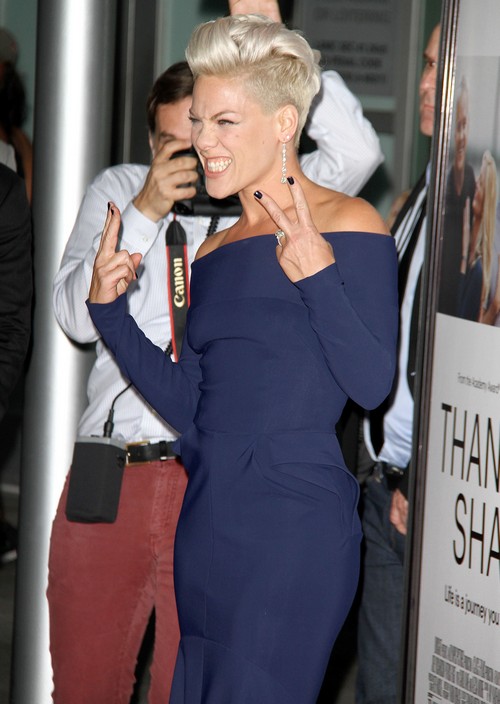 According to the latest report from the National Enquirer, Gwyneth Paltrow and Pink are embroiled in a ‘little’ feud. The report claims that Gwyneth and Pink bonded over the set of Thanks For Sharing, but when Pink got better reviews for her performance, it was Good-Bye Pink and Hello Goop Enemy Camp.

A source tells the Enquirer, “It started out fine. But now Pink and Gwyneth aren’t getting along.” Since Pink made her acting debut in Thanks For Sharing, I’m sure Gwyneth’s initial desire was to be charitable with her wisdom, because poor millionaire pop stars need charity. The source adds, “Pink had no illusions about being an actress when she showed up on the first day of shooting. She knew she was working with seasoned pros and even joked that she just didn’t want to get in their way.”

Gwyneth and Pink reportedly bonded over set, but things started going downhill when Pink received better reviews than Gwyneth when the film came out. I mean, the film’s reviews were pretty poor in general, but Pink was listed as one of the standouts whereas Gwyneth’s performance was more or less torn to shreds.

The source explains, “It was obvious Gwyneth was jealous. She started telling people, ‘Why would I ever want to work with that dirty girl again? She’s so unpleasant and unkempt, I don’t even like being around her.’” And Pink’s way of dealing with the situation? To reportedly write a song about a ‘phony friend’, using Gwyneth for ‘inspiration‘.

Well, Pink’s way is way better than Gwyneth’s, but is anyone surprised by this, if it does indeed turn out to be true? Gwyneth’s known for discarding her friendships rather quickly, and she’s broken off some of her friendships for a lot less than this.

What do you guys think about Gwyneth’s and Pink’s reported feud? Let us know in the comments.