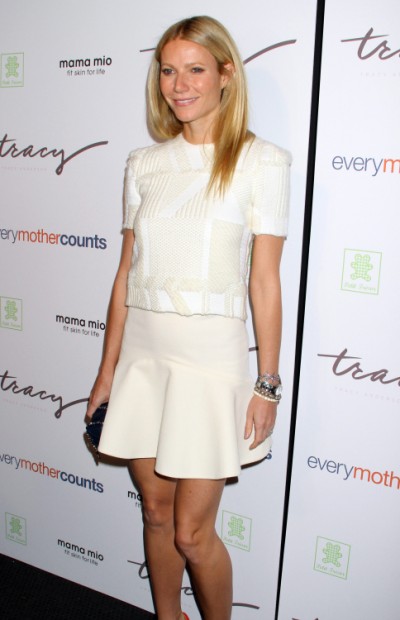 Did you hear the news? Gwyneth Paltrow turned 40 last week! Everyone’s been going on about the massive celebrity birthday party she held for herself at Upper East Side Italian eatery Elio’s Friday night. The who’s who of Hollywood elite showed up to pay their respects like GP is Vito Corleone or something. What I would have given to be there because the guest list was nothing if not surprising.

Speaking of godfathers, Steven Spielberg showed up along with wife Kate Capshaw. Jessica Seinfeld, Kristen Wiig, Ethan Hawk (gasp! Great Expectations reunion!), Beyonce, Jake Gyllenhaal, Christy Turlington, The Beastie Boys’ Mike D, Cameron Diaz and husband Chris Martin were all there to celebrate along with Chelsea Handler. Say what now? You had me until Chelsea Handler. How the hell did she sneak in? I guess they needed someone to bitch about Angelina Jolie, right?

Because why else would Chelsea be there if not for comic relief? I almost feel Chelsea has to work for her supper with these A-listers and she’s more than willing to get messed up and start ragging on Angie. Every party needs a clown and every group of girls needs to be solidified by their hatred of someone outside the group. It’s pure girl law. If you don’t have that girl you can all hate on then you’ll turn on each other. Angie’s got Brad Pitt under her spell at the moment and Brad once referred to Gwyneth as his angel in front of an auditorium of people. You think Gwyneth’s too big to make some snide remarks about her ex-fiance’s baby mama? Bitch please!

And Chelsea continues to be too happy to oblige. You’ve probably heard of her current rant on Howard Stern. She blasted Angelina again for having no girlfriends and called her evil which is so weird to me because I bet Angie’s never talked to Chelsea in her life. But Chelsea’s besties with Jennifer Aniston and apparently now Gwyneth so she’s probably heard great stories. Still, she needs to get new material.

But that story’s been all over the place since the interview ran. You better believe Gwen hit her up with a “Yo Chelsea, tell us how you really feel about Angelina!” And then the party really got started. Am I only dreaming this up or do you think it’s likely Gwyneth Paltrow slams Angelina Jolie whenever the audience is amenable? Who at that party would defend Angie from Chelsea’s wrath? Ethan Hawk had faux sex with her for Taking Lives but that was just business. Chelsea isn’t right about much but she is right when she says Angelina doesn’t make too many friends with her acting buddies. She either sleeps with you and marries you or moves on. She acted alongside Gwyneth in Sky Captain and the World of Tomorrow but clearly they didn’t exchange numbers after filming wrapped. That’s probably the biggest sin she committed against G. It’s not that she’s living with her ex-fiance, it’s that Angelina didn’t care to join G’s club. So if you’re not with us, you’re against us!

Do you think Angelina came up as a topic of conversation at Gwyneth Paltrow’s 40th birthday party? Does Chelsea Handler need to move on or is she just giving the people what they want?