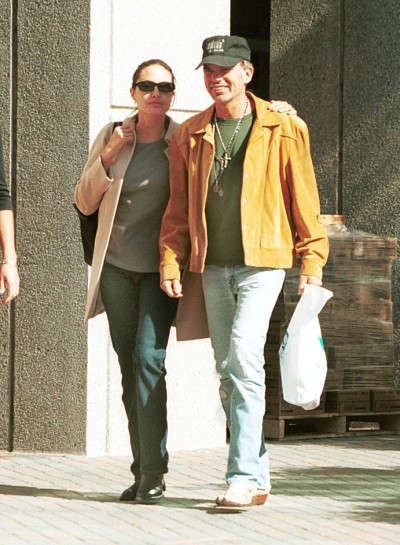 In his new autobiography, Billy Bob Thornton says he didn’t feel worthy enough to be married to wife of three years, Angelina Jolie, and being attached to the international beauty made him feel like a pathetic monster.

“Angie, I felt, was definitely too good for me and at some point, if you believe somebody’s too good for you, you’re going to mess it up,” Billy Bob explained in an interview with Nightline. “I always thought I was sort of Quasimodo or the Phantom of the Opera hiding in the catacombs. And when I was with her I think that really reached its heights. I blew it. When you’re in a relationship, any two celebrities or whatever, you know, I think that puts on a lot of pressure.”

The couple were married from 2000 through 2003 and scandalized fans with tales of Velcro walls, sex in cars before walking red carpets and, of course, necklaces containing vials of each other’s blood. But that heat wasn’t enough for the Oscar winning actor whose ego and confidence took a beating from the marriage.

“When Angie and I got married, during that time, I was more famous than she was to start with and then she becomes this big thing, it’s hard in these relationships. People have actually said that I didn’t deserve to be with her,” he said.

I actually feed a little bad for Billy Bob here. Angelina went on to become one half of the most attractive and most popular celebrity couple in history and Billy Bob… well, Billy Bob looks like he’s had some plastic surgery issues.

But he has no current hard feelings and approves of Angelina’s relationship with Brad Pitt, including her new engagement. “We’re great friends and always will be. I’m proud of the way she’s handled having a family. She’s great for Brad, Brad’s great for her. I support them 100 percent. Angie is a little girl and a woman and a teenager and a ghost all wrapped up in one.”

Oh Billy Bob…so poetic, he’s like the white trash Jane Austen. But words regarding his ex wife have not always sweetly rolled so trippingly off the tongue. In 2005 he hinted to Esquire magazine that Angelina was crap in the sack. “Sex doesn’t have to be with a model to be good. Sometimes with the model, the actress or the ‘sexiest person in the world’, it may literally be like f*cking a couch.”

But Angelina didn’t stay mad and even reciprocated the friendly love fest by writing the forward to his book, The Billy Bob Tapes: A Cave Full of Ghosts. She wrote, “He has an unmatchable wit and can make you laugh until your face hurts. To be with him is like being with a mad mathematician. He is constantly counting and repeating. Some people walk through life able to quiet the voices in their heads. He can’t. And, and everyone else who knows him well, we love him for it.”

He sounds less like Quasimodo and more like John Nash. It must have been tiring for Angelina to live with his bruised ego and constant “counting and repeating.”

There’s really no wondering why she turned to Brad Pitt but Billy Bob’s words are still insightful, don’t you think?