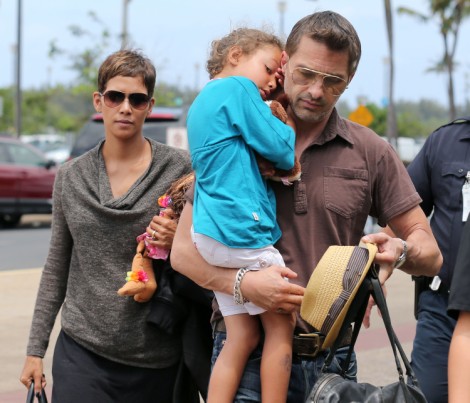 And who still thinks that Gabriel Aubry started the whole massive bust up last Thanksgiving? Olivier Martinez has a giant-sized temper and this latest video is evidence of that.

Halle Berry and Olivier didn’t waste any time creating drama on their stop back from their Hawaiian vacation when they landed in LAX last night. They were swarmed at the airport as major stars usually are. Obviously they were in protection mode because Olivier was cradling Nahla Aubry. But the presence of the child didn’t stop him from screaming curse words at the photogs the entire time out of the airport. Then just as he barely got the kid in the car he reached out to tussle with one of the paparazzi but Halle stopped him before he could do real damage. And we all know what his damage can look like.

But I’ll say this again. Halle and Olivier caused the drama. Do you think she helped matters by screaming the entire time? They are not the only stars who have to deal with this kind of commotion. Have we ever seen Brad and Angelina act in this way? No and we won’t because Brad can handle his shit and he knows that nonsense like this only incites the paparazzi more. It’s a lose/lose.

But I’m sure Halle will use this episode to cry about not being allowed to live in Paris where they have stronger laws against paparazzi. Halle Berry was mighty pissed when Gabriel won that one. But am I the only person who has concerns over his temper and the fact that this dude likes to fight? Olivier Martinez just seems like bad news. Does he freak out a lot in front of Nahla? A little inappropriate, don’t you think? The paparazzi are just doing their jobs. Olivier is just being a douche. Check out the video courtesy of TMZ below. Tell us what you think!