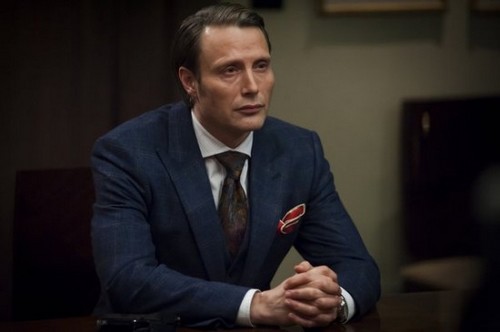 Tonight on NBC HANNIBAL continues with an all new episode called, “Roti.” On tonight’s show Hannibal (Mads Mikkelsen) misleads the BAU team in order to put Will in the same room as Gideon, and Jack (Laurence Fishburne) questions Dr. Chilton (Raul Esparza) regarding Gideon’s escape. Did you watch last week’s show? We did and we recapped it here for you!

On last week’s show the BAU investigated a murder in which two victims’ faces were similarly mutilated; given a “Glasgow Smile.” For the first time, Will (Hugh Dancy) contaminated a crime scene thinking he committed the first murder and an MRI shows he suffered from Advanced Encephalitis. But Hannibal (Mads Mikkelsen) intimidated the attending physician, Dr. Sutcliffe, (John Benjamin Hickey into telling Will he’s okay. Meanwhile, the team doubted Will who says, while revisiting the crime scene alone, he saw a mysterious, “dead-looking” woman (Ellen Muth) who might be involved. With his fears fed by Hannibal, Will returned to Dr. Sutcliffe for more mental health tests, when the doctor was murdered.

When Dr.Gideon (Eddie Izzard) escapes from police custody, he seeks to kill psychiatrists who have profiled him. Will (Hugh Dancy) and the BAU team try to track him down by following Freddie Lounds’ (Lara Jean Chorostecki) blog before Gideon can get to Alana (Caroline Dhavernas). Hannibal (Mads Mikkelsen) misleads the BAU team in order to put Will in the same room as Gideon, and Jack (Laurence Fishburne) questions Dr. Chilton (Raul Esparza) regarding Gideon’s escape.Also starring Hettienne Park, Aaron Abrams, Scott Thompson.