Harry Styles Begs Taylor Swift To Take Him Back – Report 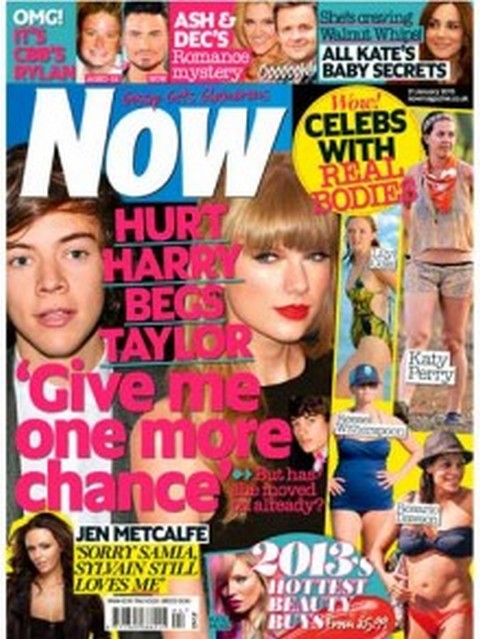 “Hit me with your best shot, why don’t you hit me with your best shot?” is what Harry Styles is singing to Taylor Swift on the cover of the latest edition of Now magazine. According to the headline, the squirrel-faced Harry is begging Taylor to take him back and give him one more chance. (Until the twelfth of never, Harry… Until the twelfth of never.)

Dude, this is Taylor Swift we’re talking about – she eats men for breakfast, lunch, and dinner. She writes songs about said men, makes millions of dollars from every failed relationship, and becomes even more popular amongst her fans. In a way, Taylor is like a music prostitute – without her “love” and her “men”, we won’t have Taylor Swift. So, if you’re interested in reading more about Harry begging the bitch – sorry, girl – to take him back, be sure to pick up Now now.

In other news, also on the cover, there’s more Kate Middleton baby/pregnancy news (when will it ever end?). According to Now, Kate’s got more baby secrets than a crèche owner on the verge of a nervous breakdown. The tagline explains that Kate is craving “Walnut Whips” – a sweet, chocolate delicacy coated in euphoria and the tears of a small Chinese baby. We bet she’s also craving some Camilla Parker-Bowles silence for “one freakin’ day!” Imagine how much horse head talks when she’s nervous. That witch is all word vomit up in that palatial joint. (No wonder the Queen and Prince Charles suffer from insanity.)

There are other meaningless UK celebrities also featured on the cover, but we don’t care about them. We only care about Kate Middleton and Prince Harry Jr.  – Harry Styles for those readers who drool in cups. Go pick up Now, now and read all about it, will you?