Heidi Klum And Seal Get Back Together – She Dumps Bodyguard (PHOTO) 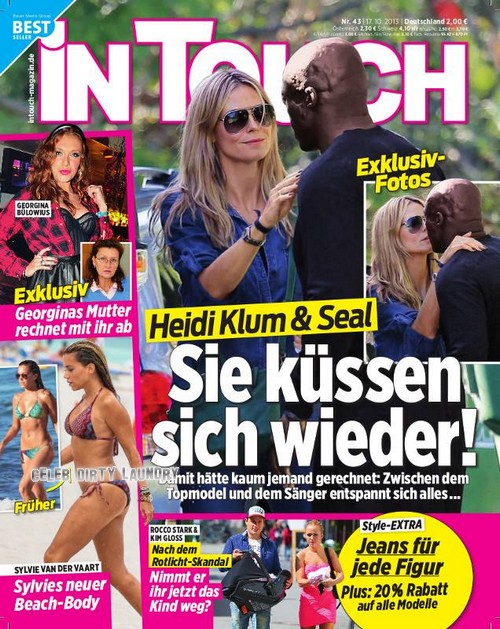 Could Heidi Klum already be tired of her bodyguard/lover Martin Kristen? According to a new exclusive from the German issue of In Touch Weekly, Heidi and Seal were photographed hugging and kissing, indicating either a reunion or an affair.

I mean, Heidi’s not exactly new to affairs, is she? Unfortunately, it looks like one of the reasons that Heidi and Seal broke up in the first place was because she may have cheated on him with her bodyguard. So is she just doing the same thing in reverse?

Heidi’s always struck me as someone who would be strong enough to end a relationship when its come to its natural end, but in this situation, either she’s a serial cheater or she’s already dumped her bodyguard. There’s really no other way to interpret these pictures, not when it clearly shows both Seal and Heidi leaning in for a kiss. Sure, they would have to meet to discuss their children and I’m sure they’ve maintained a fractured relationship after their split to enable some semblance of a normal life for their kids – but at the same time, some of Seal’s comments after their breakup were pretty brutal, and didn’t really indicate that the former couple would stay on talking terms.

And here they are, hugging and making out in broad daylight. I’m guessing Heidi realized that there really wasn’t much of a future between her and her freaking bodyguard, and so she decided to get back together with Seal. After all, she was with him for so many years and he’s the father of her children. They already have a comfortable relationship, and if she was willing to take him back, I’m sure Seal forgave the whole bodyguard relationship thing.

What do you guys think? Do you think Heidi and Seal have gotten back together, or could she be cheating on Martin? Let us know in the comments.