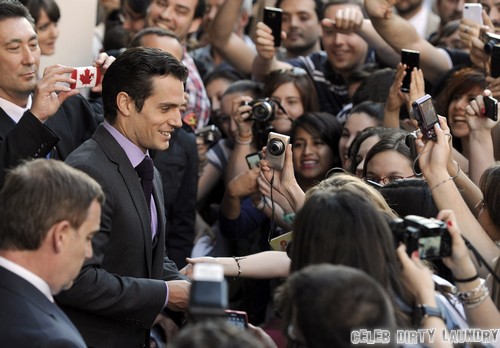 According to reports, Henry Cavill might be out of the running to play Christian Grey in the upcoming Fifty Shades of Grey adaptation because of scheduling conflicts. I just heard a million women start crying. Calm down ladies, nothing’s set in stone yet.

Since a director has now been chosen for the film, casting will be the next major step. Everyone’s favorite choice, Henry Cavill, is just coming off a massive success with Man of Steel this past weekend. Of course, this just reinforces his status as the frontrunner for the role – if he wants it. However, that might not even be an issue anymore since he might not be available to film the movie.

According to a report from Variety, Aaron Johnson – who was initially rumored to possibly be cast as Christian Grey – will be staying home with the kids while his wife, Sam Taylor-Johnson, is directing the film this fall. Although the report doesn’t specifically state the production timeline, the fact that they single out ‘fall’ means that they’re most likely planning on shooting the film during that time period. Of course, it also makes sense from a logistical point of view since the film has to be ready by next summer, and there’s absolutely no way they can film anything later than this fall and have the footage be ready.

Anyway, that leads us to a big problem where Henry’s concerned. He’s set to be shooting The Man From U.N.C.L.E. this fall, and then go right into production for Man of Steel 2. He will literally have no time to breathe, much less shoot another film in between those two. Of course, the production schedule is not confirmed yet, so if they really want him and he really wants to do the film, something could work out. Just don’t hold your breath for that to happen.