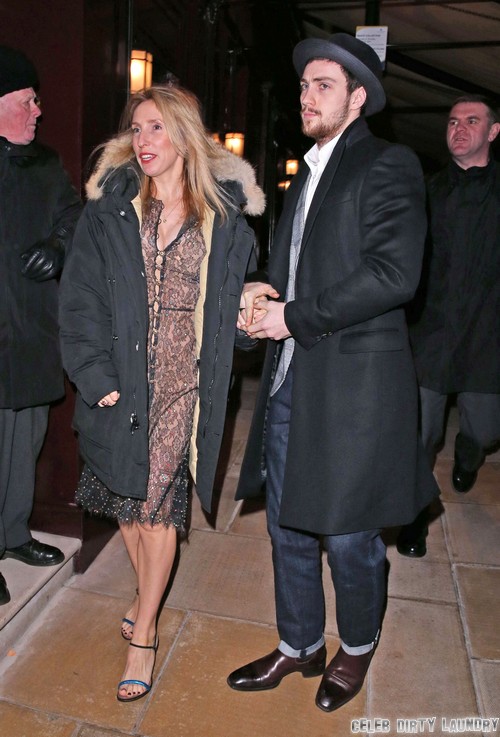 Didn’t we just tell you guys that the filmmakers for Fifty Shades of Grey were about to make a decision on the director? Well, the script’s been written, and now the director’s been chosen: Sam Taylor-Johnson, best known for Nowhere Boy and marrying her young star, Aaron Johnson. The 22-year age difference between the two has often been commented on more than Sam’s directing prowess, but she definitely has talent in turning the most lurid material into something that’s passionate and soft.

In that regard, she’s perfect for this job. Let’s be real here – Fifty Shades of Grey is going to be a very, very difficult story to translate to film.  If they’re not making it NC-17, then the scenes will have to be done very gracefully and subtly. It’s great that the producers decided to choose a woman for this role, because it definitely does need a woman’s touch guiding it – the sex scenes often come across as lurid and not very….tasteful, and Sam has the talent to rein all of that in.

Anyway, so now that the director’s chosen, the acting search will soon begin in earnest. Of course, this is the moment that all Fifty Shades fans have been waiting for, and the casting net will be cast very wide. Although the filmmakers have expressed an interest in possibly hiring an unknown, Henry Cavill right now is at the top of everyone’s list – if he’ll take the role. That’s a very, very big IF, especially since he’s coming off enormous success with Man of Steel.

However, now that Sam Taylor-Johnson has become the director, is it possibly that she’ll hire her hubby Aaron Johnson in the role? This is very unlikely, but they’ve already worked together once, so we know they have a great working relationship. Aaron has also said that he wishes nothing more than to work with Sam again, and this might be the perfect opportunity for a collaboration. Aaron has the looks to play Christian Grey for sure, but is he the right age? Fans might say no, but keep in mind that anyone could be made to look the right age with enough makeup.

What do you guys think about Sam Taylor-Johnson directing Fifty Shades of Grey? And do you think Aaron Johnson would make a good Christian Grey? Let us know in the comments.