Henry Cavill and Gina Carano Reunite – Back In Los Angeles To Prep For “The Man From U.N.C.L.E.” 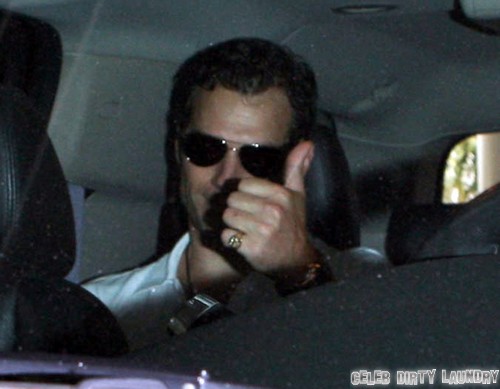 Henry Cavill is back in Los Angeles today after a whirlwind promotional tour for Man of Steel that has taken him around the world in a matter of weeks. His hard work has paid off as the film currently stands above $400 million at the international box office, and it’s well on its way to reaching $800 with several more key markets yet to open.

So what’s next for Henry? Well, he has another high-profile project coming up called The Man From U.N.C.L.E. with Armie Hammer, also from Warner Brothers. It looks like WB is trying to keep Henry in-house, which is a smart move since his star has just blown through the roof and if they can cultivate a strong relationship with him right out of the gate, then all the better for them.

Now, a lot of fans were wondering where Henry would go after the promotional tour for MOS wrapped up. The Man From U.N.C.L.E. is still in pre-production, and it’s not rumored to go into production until September, so he’s not yet going into filming for that.

Before Henry left on the MOS promotional tour, he indicated in different interviews that he was splitting time between his home in England and living with his girlfriend, Gina Carano, in Manhattan Beach.

Of course, the fact that Gina was nowhere to be seen during the Man of Steel promotional campaign has led many fans to wonder whether Henry and Gina are still together, and there seems to be a lot of differing opinions on that front. Some people claim that Henry and Gina are taking time off from the relationship, others claim that she’s busy, and it could also have simply been a case of her not wanting to take away spotlight from Henry’s big moment. Regardless of what it was, everyone thought that they would get the answer after the promotional tour for MOS was over. If Henry returned to England and stayed there, it meant that they were broken up. If he returned to LA and Manhattan Beach, then they were still together.

While he’s certainly returned to LA, I don’t think it’s that simple. Since his career is taking off and he’s undoubtedly taking a lot of meetings with producers and executives, he would have to be in LA regardless of his relationship status with Gina. Even if production on Man From UNCLE doesn’t begin until September, he may have to be in LA for other business reasons, and unless he’s spotted back in Manhattan Beach or with Gina, I think the speculation is bound to continue.

Henry Cavill arriving on a flight at LAX airport in Los Angeles, California on June 26, 2013