‘Her’ Movie Review: Smart, Funny, And A Great Parallel To Our Current World 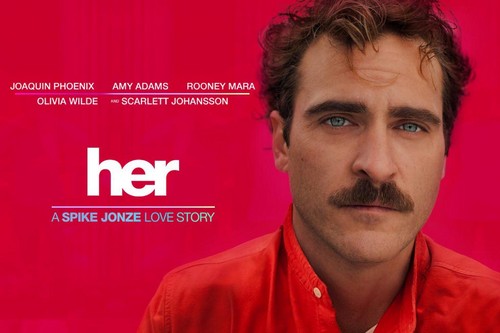 Her is the rare movie that’s both charming and quirky. Spike Jonze has a knack for making interesting sci-fi movies seem real, a talent that’s becoming increasingly rare in our blockbuster and superhero-driven culture. He’s always putting characters above anything else in his movies and that pays off in spades here.

By the way, that’s not to say that Her doesn’t have a coherent outline – it absolutely does. It’s just that the characters drive the narrative, instead of the other way around. And although the film’s technically classified as science fiction, it’s not so far removed from our world to really feel like an alien world. There’s nothing too extreme about the future that’s presented to us, and actually, the only major difference is that the public in ‘Her’ spends all their life on the phone as opposed to just half their life like we do.

By now, the basic premise has been presented many times. Joaquin Phoenix‘s character, Theodore, falls in love with his artificially intelligent operating system, voiced by Scarlett Johansson. It may sound silly at first, but it’s actually as honest and moving as relationship stories come. Jonze doesn’t treat this story as a comedy, and he actually makes it quite affecting. Even if ‘Samantha’, the OS, is not a real person, we don’t feel that. We feel what Theodore feels, and we see what he sees. And in the end, how different is their relationship from any of the hundreds and thousands of online relationships people embark on all over the world? In an increasingly digital age, many romances are beginning online, sometimes going for months without the participants meeting each other face-to-face. Does that mean the romance is any less potent? Well, Her answers all those questions, and then some.

Overall, I would highly recommend this movie. Brilliant acting, a great story, and a fantastic screenplay. This should be one of the frontrunners for the Best Original Screenplay, if not Best Picture, at the Oscars.