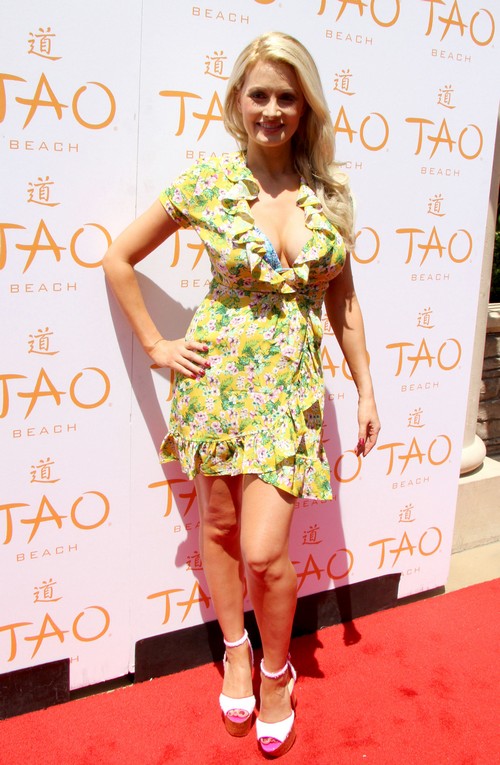 Holly Madison was bound and determined to return to her fighting weight after finally delivering her daughter, Rainbow, back in March and so far so good. The former Girl Next Door star has lost 30 pounds in the six weeks since delivering her first child and Holly is thrilled to already be down to 122 pounds. She credits the weight loss to having changed a lot of her bad habits while pregnant. Instead of eating McDonald’s each day she focused on salads, fruit and smoothies for the babies sake.

When it came time to get back in shape Holly already had her diet under control and her splurges are few and far between. According to the May 20th print edition of In Touch Holly isn’t feeling pressured by anyone at all to drop the weight. If you remember back in 2010 the producers of Peepshow insisted that she drop ten pounds in order to continue her starring role in the show. Holly talked to the press about it and caused a flurry of emails from women that thought Holly looked just fine.

Now Holly wants everyone to know that she is the only one pushing herself this time. She wants to fit in her size 2’s again and to also be healthy and strong to care for her baby. As for having more kids, Holly says she and fiance, Pasquale Rotella aren’t done yet. First though, the couple is planning to get hitched this summer at Disneyland and then they’ll consider adding to the family. While Holly seems to be bouncing back just great she hasn’t ruled out surgery in the future. She figures after she has a few kids she’ll need a little help snapping back and when that time comes she’ll be happy to go under the knife.

Do you think Holly is really losing the weight