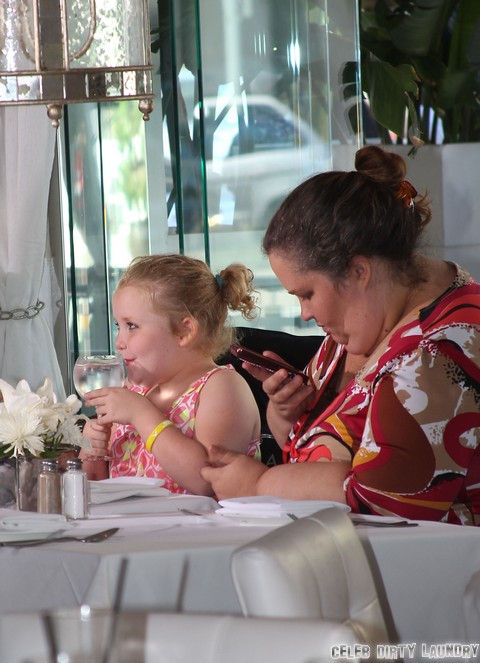 The world has been thrilled with the backwoods story about obese child, Honey Boo Boo. We jumped on the bandwagon almost immediately, but not without skepticism. The whole thing felt a little too much like child abuse—especially when reports surfaced that Mama June Shannon, 33, had ordered all healthy foods out of the house, insisting that their rise to fame and luxury was dependent on Honey Boo Boo’s chubby frame. In an unpredicted turn of events, June has dropped over 100lbs since being on the air, and we’re not entirely thrilled with the news!

“I haven’t done any surgeries . . . no diet pills . . . never went to the gym,” June said of her huge weight loss. She’s “dropped from 365 pounds to 263 pounds since she and her family started taping Here Comes Honey Boo Boo in 2011,” reports inTouch Weekly, print edition February 25, 2013. The family hasn’t cut back on staple foods “like ‘sketti’ [fake butter and ketchup over noodles] and cheese puffs.” Though the weight loss counts for nearly 25% of her total body weight, she looks much the same.

June explained that her film schedule “has me running around and going different places. I guess it’s paying off!” Pardon me for not jumping with joy. June is, undoubtedly much healthier since the weight loss, and that she did it without major lifestyle modifications is something out of late-night weight loss infomercials. We just wish that June were taking her family’s health more seriously, and that working with TLC was exposing her to a healthier lifestyle. We all have family comfort foods that are calorie-laden favorites, but the Honey Boo Boo family survives on nothing else.

Mama Boo Boo should be focused on helping her family to become healthier and stronger, but instead she’s taken the Kris Jenner path, forcing them to do whatever will make her a buck. Maybe TLC will eventually demand that they change their eating habits and lifestyle, but until then, we’ll have hours of childhood obesity to celebrate, prime time. Do you think Honey Boo Boo is an abused child? Should June be more concerned with her daughter’s health?

Editor’s Note: Do you want to see Mama Boo Boo on Dancing with the Stars?