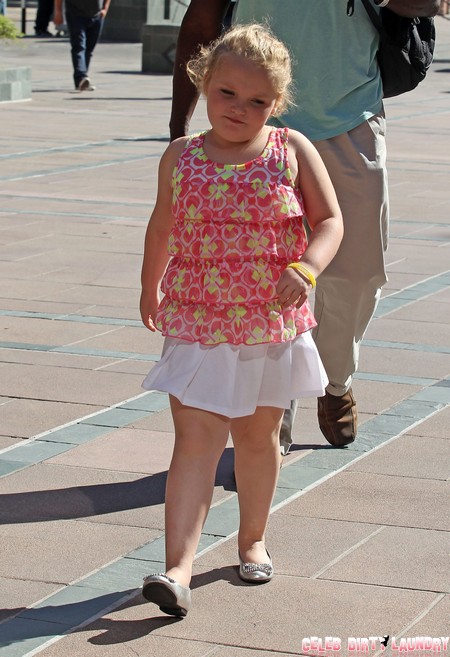 It’s one thing to jeopardize your child’s mental health by forcing them to parade around at pageants. But forcing a 7-year-old to gain weight, just to keep a TV show? It’s despicable! Honey Boo Boo is now (unfortunately) a household name. After landing a reality TV program on TLC that tells the wacky story of her “redneck” lifestyle, she’s been interviewed on late night talk shows. She’s eaten at Lisa Vanderpump’s posh restaurant. Her new active lifestyle has lead to a healthy weight loss, but Mama June worries that the key to her fame lies in her fat, and is feeding Honey Boo Boo more than ever.

A source reported to Star Magazine, print edition January 7, 2013, “Alana lost some weight recently, and June totally freaked out—she’s terrified the family will lose their TV show if Alana gets skinny. She knows the main reason Alana is a celebrity is because she’s overweight, and June won’t jeopardize that. So she’s making sure Alana gets fatter.” It may be true that the foundation of the Honey Boo Boo brand is the “thrill” of watching a family that is so drastically different from mainstream TV. But if this is true, June should be imprisoned for child abuse!

For any parent to purposely put their child at risk this way is abominable. June is setting up her daughter to face a lifetime of health disorders and deep rooted unhappiness. In fact, she’s gotten so desperate to see Honey Boo Boo put on weight that “June has banned all vegetables and fruit from the house and stocked up on even more pizza, hot dogs, and snacks.” Wanda Myrick, an employee at Jet Food Stores in Georgia where the family shops, reports, “They usually buy energy drinks, chili beans, and Mountain Dew. Sometimes they buy chips. Sometimes soda . . . They come in and out, sometimes more than once a day.”

If this is true, it’s no wonder an insider claims Alana is visibly unhappy. Her mother is driving a wedge into their family, laying the weight of the world on her 7-year-old’s shoulders. Alana is being led to believe that her weight is what pays the bills—that’s no childhood! “Alana is miserable—she doesn’t want to eat so much and would rather go play outside, but June says this is what it takes to stay famous. She even makes Alana weigh in every day to make sure she’s gaining.” I guess there are all sorts of momagers—the Kris Jenners of the world who sell their kid’s sex tapes, and the June Shannons, who put their kids at risk for diabetes and high blood pressure. Do you think June has gone full momager mode? Can Alana ever be a normal, happy, healthy kid, or is she doomed to live a life as “fat Honey Boo Boo”?