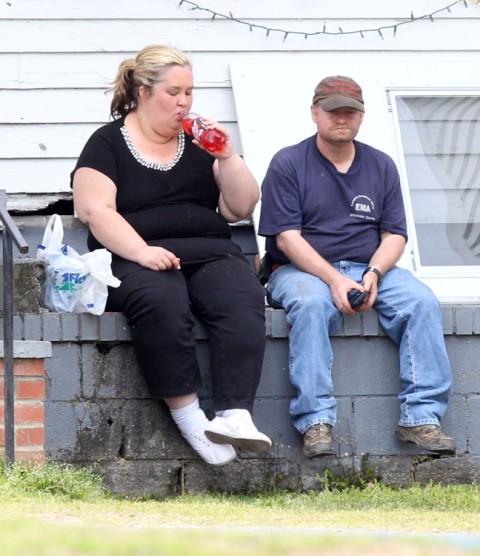 Cinco de Mayo be damned! May 5 will forever be known as the day June Shannon, a.k.a. Honey Boo Boo’s Mama June, got hitched to her one and only Sugar Bear! Break out the frozen margaritas in the bucket and wipe off the good plastic forks and spoons. It’s going to be a helluva day!

According to TMZ, after nine years Mama June is ready to make it official with Sugar (a.k.a. Mike Thompson). But don’t freak out! We’ll be able to see it all in it’s redneck glory. Apparently cameras are filming so it will most likely make it on the show so we’ll all see their daughter, Alana Thompson, make those most lovely and respectful flower girl. God, I would love a sneak peak – anything! TMZ says it’s all on the hush hush though and cell phones/cameras have been banned for the guests. DAMN IT!  I can’t wait until the show airs. The guests were asked to show up in their hillbilly finest. What does that mean exactly – black and white camouflage and undergarments that cover the entire ass?

Still… I have to advise caution on this glorious day. I hope Mama June has a prenup nice and secure. I’m not saying I don’t trust me some Sugar Bear. I don’t actually know if I trust him. I can’t understand him half the time. He seems harmless enough but Mama June has been extremely smart and cautious with the money the family’s earned humiliating itself on national television. I’d hate for any of that to backfire with a divorce. Despite appearances, Mama June has never struck me as the dumb/gullible kind so I’m sure everything is straight. So time to party!

Is anyone surprised Mama June married Sugar Bear? Weddings are so much fun but hillbilly weddings… you just haven’t lived until you’ve experienced one. I wonder if she made Sugar Bear change out of his jeans. I doubt it!