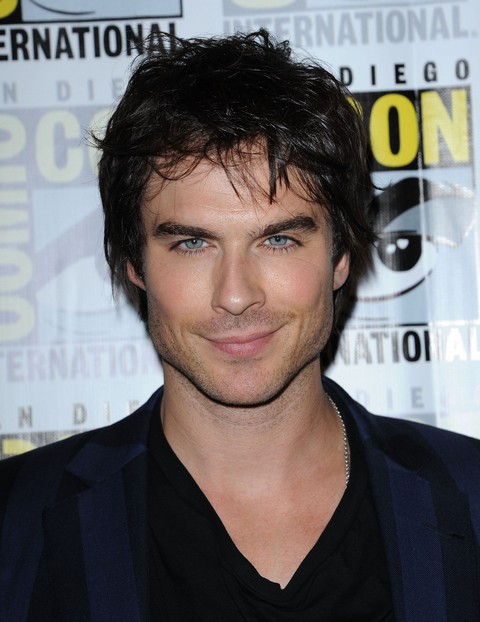 As far as TV stars and sex gods go, Ian Somerhalder is pretty eco friendly. Sure, he’s working in an industry that probably doesn’t always recycle the lights used on set—and do we really need to spend all that electricity for entertainment’s sake?—but Ian and his foundation seem to have made peace with Hollywood, if only because of the huge platform it gives their cause. Ian had a break from filiming this weekend, so he jetted from Atlanta down to New Orleans, where he attended a conference on climate chage. The actor loves keeping Twitter fans informed, and his top two girls were right alongside him in the twitterverse—and in real life!

Foundation employees Kim Klinger and Jessica Ramsey enjoyed a flirty, busy weekend with the sexy part-vampire part-billionaire executive (I will shave my head if he doesn’t get Christian Grey in Fifty Shades of Grey. Well, no I won’t).  The young blonde women seem to have had Ian all to themselves—girlfriend Nina Dobrev was nowhere in sight! Now, we’ve previously wondered if Ian and Nina may be headed into rough waters, as he seems so passionate about his green work, while Nina (based on her tweets, at least) is really more concerned about how to style bangs and exclusive Hollywood parties. Not to say she doesn’t seem quite nice, but relationships without a common goal are hard!

I’m starting to wonder if Ian has faked his public relationship with Nina for the sake of his environmental foundation and career. He may care about her—she may even be in on it—but the two don’t seem to spend a lot of time together outside of work. Then again, they could be genuinely busy with work stuff, and maybe Nina doesn’t tweet about green charities because her PR maven warned her about getting into politics. It’s impossible to say from the outside! Do you think Ian would ever cheat on Nina with one of the driven women at his foundation, or will he keep the path and let out sexual frustration while filming Fifty Shades of Grey?