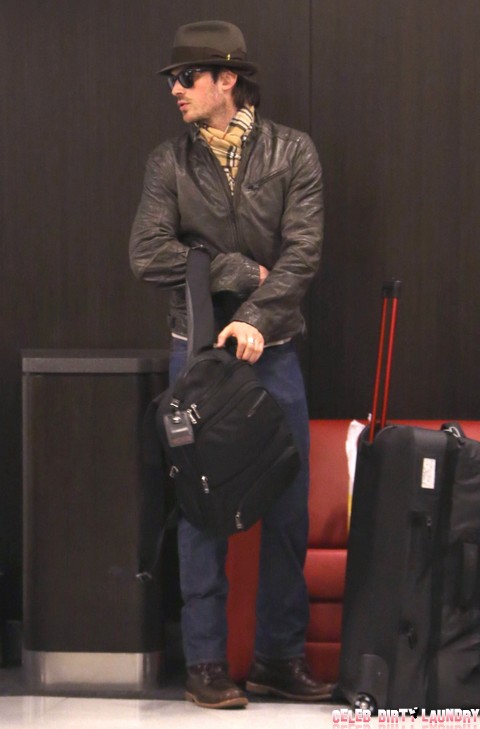 At this point, I don’t care so much who gets cast as the lead in the movie Fifty Shades of Grey—I just want news! We reported that casting won’t take place until the script is 100% finished (Boo!), but that the movie will be super sexy raunchy (yay!). My first pick for Christian Grey has always been Ian Somerhalder, mostly based on how cheeky and clever he is on Vampire Diaries. Of course, his passion for animals and social justice doesn’t hurt my opinion of him either!

Well, my dreams may be one closer to coming true. Today, Ian tweeted something that, while not an official announcement, seems pretty ballsy for one not attached to the film! “Win my personal copy of 50 Shades with a personal note :) “ he teased, linking to a donation site for his foundation. With a minimum donation of $50, you’ll have a chance to win the copy in a raffle! But what’s most thrilling is his personal note. While I’m sure the studio has a gag order on everyone working on the film, it sounds like Ian may have something to hint anyways!

Ian knows all the talk floating around about his participation in the film. If he can use it to get more support for his foundation, all the better! But I’m just dying to know what that note says! While it could be something boring, like “all the best,” I think the fact that he’s raffling off that book at all is quite telling! Ian just returned from a tour of Asia with girlfriend and costar Nina Dobrev. They’re back on set for work today. He tweeted, “Back in the saddle and ready to work- #tvd time. UP, 6AM-training, breakfast, study lines, bite someone . . .” Do you think Ian is one step closer to landing the role of Christian? Will he insist on playing opposite girlfriend Nina?