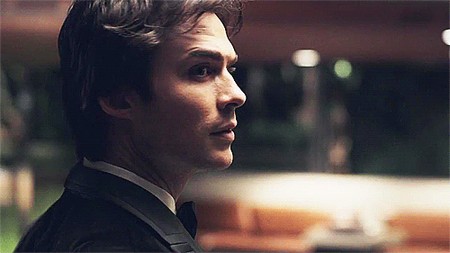 Ian Somerhalder and Nina Dobev breaking up has been at the center of headlines for a week. Are they avoiding each other? Did one of them cheat on the other? These are questions that have been plaguing fans of the Vampire Diaires and fans of Nina and Ian. However, Ian has resurfaced in public for the first time since the announcement of the breakup went public, and he seems pretty melancholy about it.

While he hasn’t mentioned anything about the breakup at all, he did post a rather cryptic message on his Twitter the other day. He posted, “A THOUGHT FOR TODAY: People change and forget to tell each other – Lillian Hellman, playwright (1905-1984).”

Could he have been referring to his relationship with Nina? After all, the consensus of most of the reports seemed to be that they ‘grew apart’, although some tabloids have pointed to cheating as a cause. From this tweet, it seems like the breakup wasn’t as amicable as they both would have us believe. Won’t that make things awkward on set when they return to shoot the Vampire Diaries in Atlanta? I guess that’s a risk you have to take when you decide to date a costar.

Do you guys think Ian is over Nina? Did one or both of them change, or did Ian cheat on her? Will they remain broken up, or will they get back together? Let us know what you think in the comments.