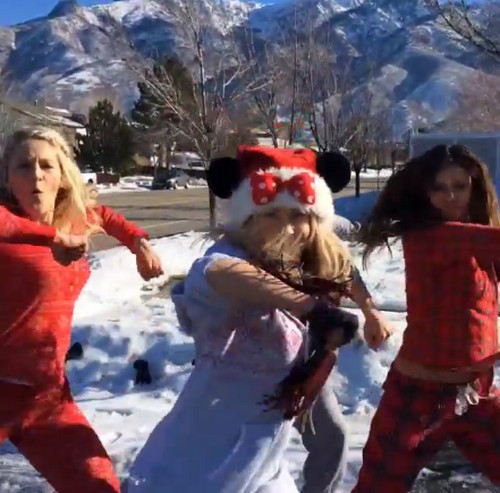 Nina Dobrev has been spending time with ex-boyfriend Derek Hough over the Christmas holidays, which obviously means they’re on good terms. They kinda have to be, considering Nina’s best friends with Derek’s sister, Julianne Hough. However, that does lead us to wonder how Nina’s rumored on-again/off-again boyfriend Ian Somerhalder is taking the news.

Most celebrities are just like normal people in that they don’t see their exes after the breakup – with exceptions, of course. In this case, Nina had to work with Ian after breaking up with him. But nobody’s forcing her to hang out with Julianne and Derek at their house. Even if she’s friends with Julianne, if she was uncomfortable seeing Derek, she could have easily asked Julianne to spend time elsewhere. No, she’s obviously comfortable with Derek, as evidenced by their dance video uploaded by Julianne. And they broke up, what, a few months ago? Is that enough time to get over your ex?

And that too, an ex that you may or may not have cheated on to get back with your previous ex-boyfriend? What a convoluted web of romantic confusion, this becomes. Lest we say, this is all presumption and Ian may be completely fine with Nina hanging out with Derek. I’m just saying – it is very quick for anybody to feel so comfortable around their ex, unless Nina’s a better actress than even we give her credit for.

What do you guys think? Do you think Ian cares that Nina’s been spending time with Derek? Or you think he doesn’t care? Let us know your thoughts in the comments.