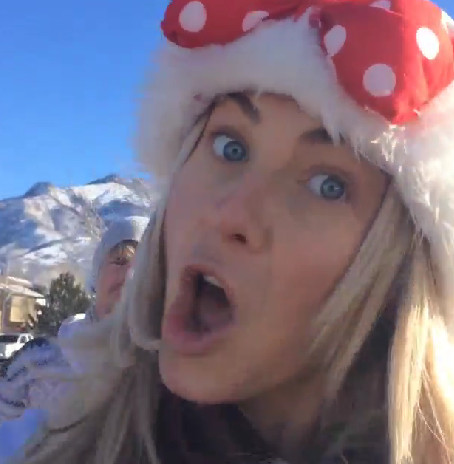 Julianne Hough and Derek Hough, both known for their dance work on Dancing with the Stars, partook in an epic dance war this holiday season — and they captured it all on video. Nina Dobrev, a good friend to Julianne, hopped on board Team Hough, whose choreography duked it out against Maria Menounos‘ brood. While the Extra host put forth a great effort, she had to know she wasn’t going to beat the Houghs, right? Perhaps she was hoping for some sort of Christmas miracle.

It was interesting to see The Vampire Diaries star over at the Houghs’ house, especially in light of Nina and Derek’s *alleged* romantic linking (and then unlinking) this past year. Regardless of whether or not they still have feelings for each other, they appear to be great friends, and their dancing exuded holiday cheer. Actually, Nina’s video, which was posted on Julianne’s account, is one of our fave vids!

Maria’s videos were trying to be Christmas sexy and sometimes weirded us out, but we’ll forgive them. They definitely lacked the amazing dance moves and touch of an award-winning choreographer. Check out the videos below, which feature epic holiday dances in the snow, in the house, in the pool, and in the street!

What do you think about this hilarious, creative, and epic Instagram dance battle? I hope they do a New Year’s dance battle!