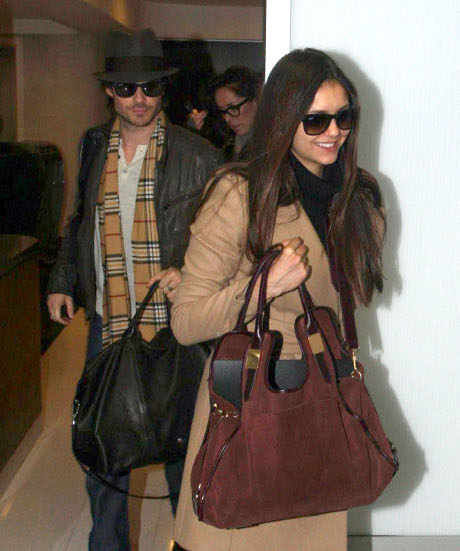 Ian Somerhalder and Nina Dobrev have been getting a lot of attention lately as one of TV’s most talked about couple. On screen, in the epic supernatural drama The Vampire Diaries, their relationship is anything but simple; however, off screen, Nina and Ian have become known as being one of Hollywood’s healthiest, most functional couples. Nothing ever bad seems to be reported about them. They are world travelers and appear to live in a universe of eternal rainbows and sunshine. I mean, c’mon, can’t you give us at least one juicy argument or piece of scandalosity?

So what’s the key to their success — as partners in real life as well as in the workplace? Support. That’s their secret. Both Nina and Ian are very supportive of each other in all facets of their life and they are a team in all sense of the word.

They constantly walk down red carpets hand-in-hand or arm-in-arm, and they aren’t afraid to show their fans that they are madly in love. Aside from making their Vampire Diaries fanclub giddy with the idea of their onscreen romance spilling over into the real world, they are constantly applauded for their charity work and participation in several organizations. Ian is all about rescuing the animals and Nina constantly strives to enlighten youth about both global issues and the importance of self empowerment.

Even though their real-world romance began on the set of VD, Nina was a bit reluctant to take the plunge with any of her co-stars. “The first time I was on the cover of Seventeen, the cover line said ‘Nina: Why she wouldn’t date any of her co-stars.’ And then cut to two years later…it’s funny that I said that, but you know what? It was honestly what I believed at the time,” Nina said in a Seventeen interview. “I didn’t want to be dating one of my costars — my goal on the show was to be professional. But sometimes you can’t help who you have a connection with, and you can only fight it for so long — which I did for a really, really long time.”

They’re a great couple and it will be interesting to see how far they go before pitfalls are reached. Maybe they won’t ever fight. Probably not the case, but if so, I think it’s proof that they really are supernatural. So when’s the wedding?