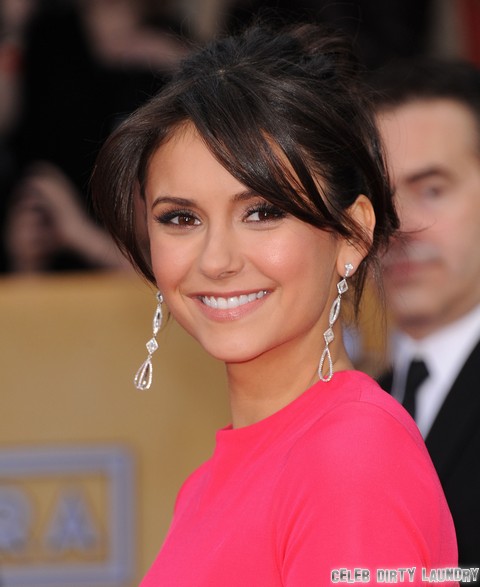 Nina Dobrev is starting to really look like a woman stuck smack in the middle of a relationship crisis.  After spending a month apart she and Ian Somerhalder reunited last weekend to visit a young girl in need of a double lung transplant in Toronto. The couple had been rumored to be taking a break and while there were photos from Toronto that made fans grasp at hope that they had ironed out their issues, there were other shots that told a different story.

In those Ian looked completely irritated and like he didn’t want to deal with Nina who appeared to be upset and smoking. After returning from Toronto Nina posted a tweet about trying to break down someones walls – an obvious reference to Ian. Ironically that tweet has since disappeared and I’m not at all surprised. Nina is textbook. Ian dumped her and she’s still hanging onto hope that she can do or say something to fix it. She posts or says things and then takes them back because she doesn’t want to seem desperate even though in some ways she’s still feeling it.

After deleting her telling tweet Nina then turned her Twitter focus back to raising support and help for Kayla, the girl in Toronto.

I think Ian realized that their relationship was at a point of either needing to commit or pulling the plug and he wasn’t ready to step up and give Nina what she really wanted.  Plus he is young and hot in Hollywood, with rumors continuing to swirl that he is a front runner for the lead in the Fifty Shades of Grey movie.  I think Ian was too curious about who or what may be coming around the corner to make it official with Nina.

Do you think these two will patch things up and get back together or at this point is it all one-sided? Is Nina left pining for Ian and he has already mentally moved on? Tell us your thoughts in the comments below!