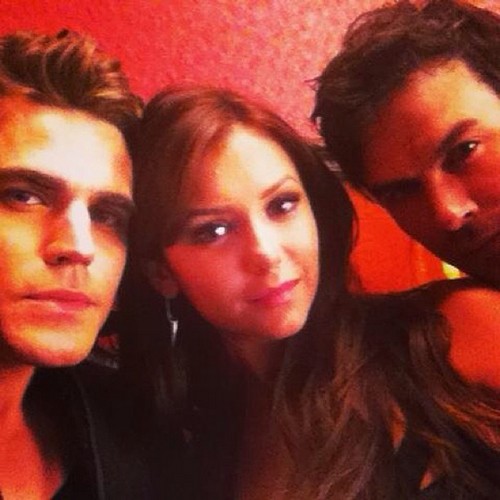 Ian Somerhalder and Nina Dobrev broke up several months ago, but both have been spotted together in the past few weeks. Of course, most of those recent reunions have been inevitable, since the duo have been promoting The Vampire Diaries at Comic-Con and at various events and interviews. However, they have to know that every move they make and every tweet they send out is being watched, right?

They’re not stupid, they know. And if they know, you have to wonder if they don’t realize that every tweet is being taken as a cryptic hint by their crazy fans that they will get back together. For these fans, the latest ‘clue’ seems to be that both Ian and Nina tweeted about their behind the scenes experiences earlier today. Ian tweeted, “Being on a set- day in the life of your’s truly…” whereas Nina tweeted, “Cosmo Behind-the-scenes Picture of the Day: Nail Art! White+silver color blocking w/ carefully placed silver diamond…”

In any normal occasion, would that mean anything to fans? Probably not. But since there are rumors of a possible reconciliation between the former couple, fans are taking everything as a literal sign that they could be getting back together. In this scenario, it’s unlikely that the similarity in the tweets was anything but a coincidence, but I do think that Ian and Nina often tweet philosophical messages when they’re trying to give out hints about their relationship. Again, they’re not stupid, and they know that rumors about their relationship bring in a lot of unpaid publicity to their show.

What do you guys think about Nina and Ian’s tweets? Do you think they mean anything, or are the fans are just reading too much into them? Let us know your thoughts in the comments.