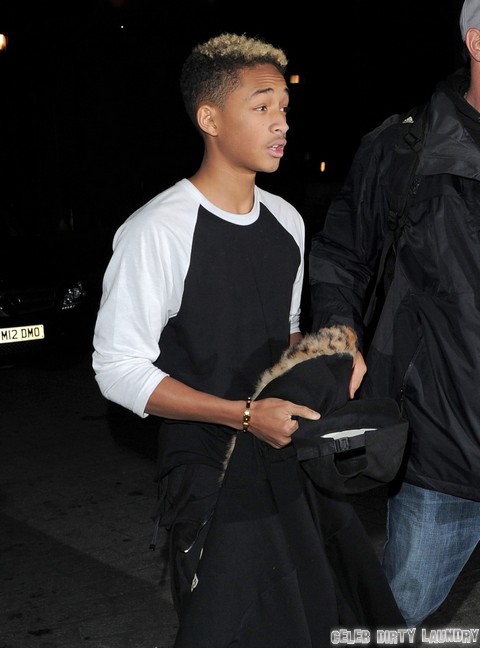 Kid’s only 14 years old, and is already a total scoundrel! Or do we just chalk this up to hormones? Jaden Smith has barely hit puberty but has mastered the art of two-timing and manipulating. We reported that he and Kylie Jenner were caught on a date at Nobu in London, but new details are coming out—chiefly that he pulled a sister switch, and his parents are furious!

“Jaden Smith has quit courting 17-year-old Kendall Jenner and has been spotted on cozy dates on two continents with her little sister,” reported National Enquirer, print edition March 18, 2013. Though he was with Kendall “holding her hand on an ice rink during her birthday party,” they split soon after and he’s has his sights on a different Jenner. “Jaden was hopelessly infatuated with Kendall, but their age difference got in the way.” Excuse me, but a 3-year age difference as teenagers is just freaky. College—fine. But Jaden is 14. Seriously—he’s in like, Algebra and learning about topic sentences in English, right? Sorry, but gross.

Fortunately, Kylie is way closer in age, and “with Kendall’s encouragement, Jaden decided to switch his attention” to her. In predictable fashion, Kris Jenner is all over her daughter’s A-list hookup, and is “pushing for Kylie and Jaden to become the family’s next power couple,” but his parents aren’t having it! Will Smith and Jada Pinkett Smith have agreed on this—despite their pending divorce. They’re “determined to keep their son from getting tangled up in the scandal-plagued Kardashian reality show empire,” but are still letting him spend time with her.

“His concerned parents laid down the rules—the only way he could go is if Will acted as escort,” and we reported that Will might have turned it into a double date by hooking up with Nicole Scherzinger! Though the kids can spend time together, “Will and Jada aren’t in favor of Jaden dating either Kylie or Kendall, so they won’t be leaving the new lovebirds alone.” Do you think Jaden and Kylie are a match made in heaven? Will Kris get her wish and have Kylie marry into the super-successful Smith family?