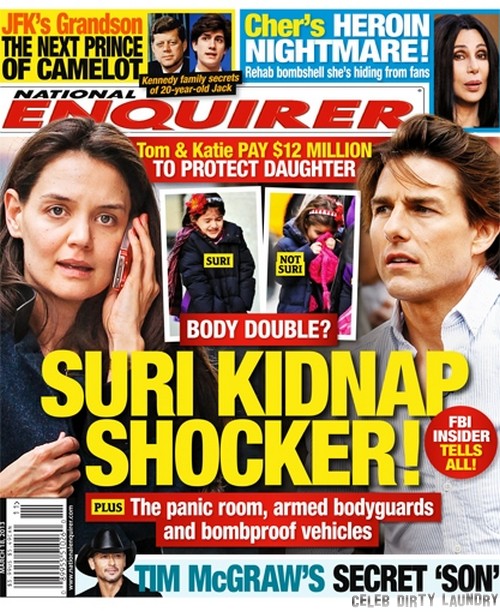 Famous tot Suri Cruise is featured on the latest cover of the National Enquirer and apparently there has been some sort of kidnapping drama. Why else would they need a double of the fashion loving kid?!?

Featured on the cover is a Suri body double along with the statement that Tom Cruise and Katie Holmes are shelling out a total of twelve million dollars to protect their precious daughter. We can’t say that we’d blame the famous former couple. We would be doing the same thing if we could afford it and our daughter’s life was possibly in danger. Wouldn’t you?

In addition, the magazine covers all of the necessary things to keep precious Suri out of harm’s way. Included in that are the armed bodyguards, the panic room and the bombproof vehicles. We’re guessing that perhaps Tom is either super paranoid or he’s worried that those who don’t like him may be trying to take it out on his daughter. Do you buy into all of the hype? Hit the comments and let us know your thoughts!