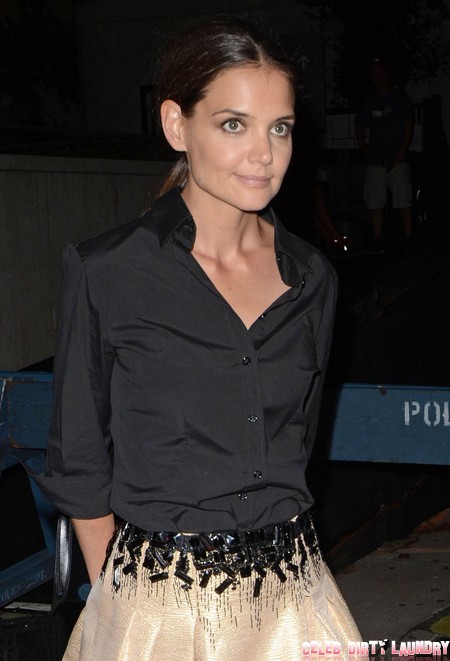 Suri Cruise has supposedly convinced her mom Katie Holmes to sign up for ABC’s Dancing with the Stars – a competitive show filled with D-list celebrities who are desperate to get a spot in the limelight again. Though Katie has all the money in the world and would have no reason to try and get attention, seeing that she got plenty of it after she filed for divorce from Tom Cruise, the actress just loves dancing.

Her 6-year old daughter is said to be getting tired of seeing her mommy dance around the house like an idiot, so instead of annoying the little girl.. how about annoy the nation when they see you week-to-week get grilled by the judges. Ha! But wait – when we put our smart brain to good use, we recall Katie announcing she’d be ending her Broadway play Dead Accounts SEVEN WEEKS early due to terrible ticket sales. Nobody cared about seeing something created by the woman who hates Scientology!

According to the Enquirer: “Insiders say it may be the perfect vehicle to super-charge Katie’s career, which has been in a tailspin since her August divorce from Tom Cruise. Katie and Suri are huge fans of ‘Dancing’ and watch it every week. They’ve really bonded as mother and daughter over the show and dance in general. Suri has been prodding her mom to join the series. Katie figures if she doesn’t manage to land a spot on the upcoming season, she’ll try for the next.”

Holmes probably thought that the play would be a big hit in New York and she’d have herself a moneymaker on her hands, but that was far from the case. The 34-year old struggled to fill up the room for each show that went ahead, but even critics named it one of the worst shows of 2012, while another said she should just stay at home and spend Tom’s millions of dollars rather than produce crap for Broadway lovers. So in all fairness, the move for her to sign a deal with ABC to appears on DWTS makes sense — she’s not exactly an A-list star anymore, she never was, now that she’s no longer with Mr. Cruise, she hasn’t got anything going on for herself.

Her movie career went downhill when she turned down to reprise he role in Batman: The Dark Knight Rises and the men are not exactly falling to the ground, begging her to date them, are they? She isn’t that good looking, so she’s going to have to make the effort herself. She better take it.. before her money runs out. Now that she’s no longer with Tom, it will eventually finish.. trust us when we say so! Ha.