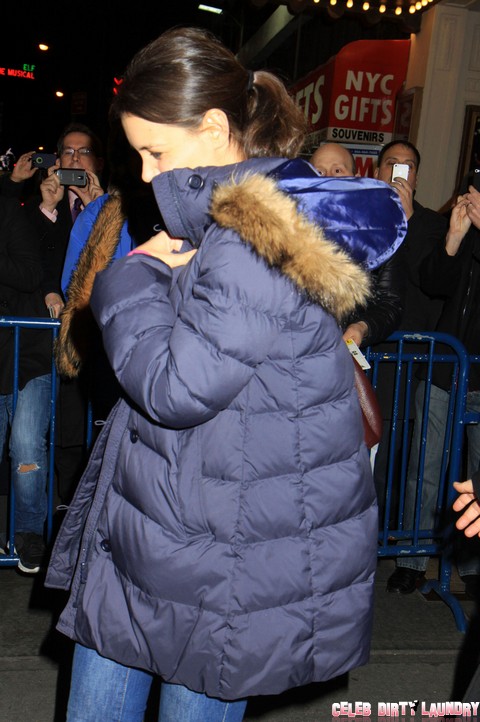 Uh-oh…it seems that Katie Holmes might be turning into a raging ex-wife.  Sources close to the ex-Mrs. Tom Cruise have said Katie’s usual bubbly personality has taken a turn for the dramatic.  Perhaps she is just trying on another persona for a new acting gig, or perhaps she really is turning a little bit psycho.

It is understandable that she would become another person after a very public divorce; especially since the man she left still has an amazing career with multiple projects still in the works.  Is being in a Broadway production really that exciting after wanting to become a major movie star, Katie?  If it is, then more power to you.  If it isn’t, are you really going to blame Tom for that?  You left him, sister.  With no movie career, no man, and no real friends just how is that decision working out for you?

And just what exactly is Miss Holmes so pissed off about?  Apparently that Tom has gotten on with his life and is now dating, the attention and gifts he lavishes on their daughter, Suri, oh, and his non-stop, bad ass movie career.  A source close to the couple has reported to the National Enquirer that Katie has been screaming at Tom recently like a bitter ex-wife.  She even went so far as to tell him, “You make me sick!”  Scandalous.  Wouldn’t it be divine to be a fly on the wall during one of their conversations?

Since we can’t be eavesdroppers then we should be speculators.  What do you think CDL readers?  Has Katie really gone off the deep end?  Do you think Katie is jealous of the attention Suri is getting?  Is she resentful of Tom for her less than stellar acting career?  Does Katie really just want Tom back???  OMG!  That would be amazing.  Please, please, please tell me she is dying to be a Stepford wife again and refuses to let another woman take her place.  Uh-mazing!